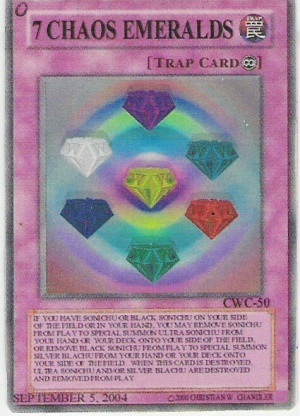 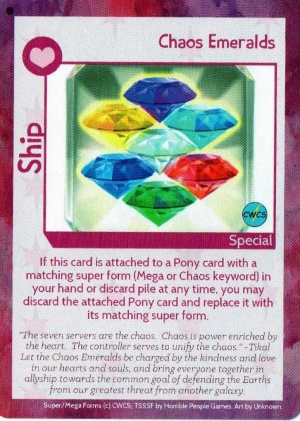 Chaos Emeralds are a group of multi-colored emeralds that appear in the Sonic the Hedgehog franchise. They possess mystical powers, and to quote Wikipedia, they "can turn thoughts into power, give energy to all living things, and be used to create nuclear or laser based weaponry."

The Chaos Emeralds appear in virtually every Sonic the Hedgehog game. In the original game and its Game Gear entries, there were six emeralds. Sonic the Hedgehog 2 for the Sega Genesis upped the number to seven, where it remains to this day, the only exceptions being an obscure arcade game called Sonic the Fighters, where there were eight for who the hell knows what reason, and the Sonic Game Gear titles, where the collectible number of Emeralds varied from 5 to 6.

What these MacGuffins can do exactly is unknown, but they've been shown to have a variety of powers over time, as stated above. In the original game, they merely unlocked the "good ending", but from Sonic 2 onwards, their main purpose was to transform playable characters into their super forms. Sonic becomes Super Sonic, Shadow the Hedgehog becomes Super Shadow, etc. The 1998 game Sonic Adventure expanded on their backstory a bit and explained that the super forms were induced by positive or negative emotions, and the infamously bad Sonic the Hedgehog (aka Sonic '06) game expanded their roles to show that they have the power to resurrect the dead through granting wishes, further cementing their status as Dragon Ball ripoffs.

In Sonichu, the Chaos Emeralds are very rarely seen, as their roles are filled by Chris's own half-assed ripoffs named the Sonichu Balls, but they do make their own rare appearances. The only time they are actually seen in the comic is the very first episode of Sonichu #0, as the comic's opening scenes are an adaptation of the ending of Sonic Adventure, in which Sonic utilizes the emeralds to become Super Sonic. The emeralds are also briefly glimpsed once again when Sonic collides with the Pikachu that would then become Sonichu, and it is their energy that creates the Chaotic Rainbow, which created both the Sonichu Balls, Rosechu and the Chaotic Combo.

Afterwards, the emeralds never actually appear again, but after Crystal is trapped in the Dark Mirror Hole in Sonichu #6 the Chaos Emeralds are mentioned in passing, being suggested as possible substitutes for the Sonichu Balls to rescue her.