Christian Weston Chandler, believing himself to have at least one Cherokee ancestor, has incorporated this heritage into the mythology of the Sonichu comics. Completely disregarding clans such as the Fox or even the Apaches, Chris established the Wasabi Clan as a rival tribe in the same area.

Wasabi is actually a spicy greenish paste, used as a condiment for sushi and other elements of Japanese cooking. Considering that Chris is a weeaboo, it wouldn't be surprising if he heard it while at a sushi restaurant and stole it for his own purposes. 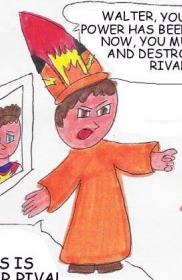 The wasabi rival or the Pope, whatever.

Despite their differences, the Cherokian leader and his Wasabi rival were eventually able to forge a temporary alliance against the greater menace of Count Graduon. Together, the Wasabi and Cherokee defeated Graduon, imprisoning him within a magic scepter for centuries. Nevertheless, the Wasabi still coveted the Cherokian Crown, and their failure to obtain it would persist as a source of tribal shame for centuries to come, causing them to cry "trails of tears", because that's totally what the Trail of Tears was.

By the 21st century, all remnants of Wasabi culture had disappeared. The Wasabi themselves may have been killed or assimilated, leaving their proud tradition of cartoonish supervillainy to be forgotten.

The Wasabi Rival used a magical charm called a "Fireshock Pendant" to counter the powers of the Cherokian Leader and his queen. At some point, the pendant was placed within the Destiny Cave, to fulfill the Anchuent Prophecy.

In 2005, the prophecy came to pass, and the Fireshock Pendant was bestowed upon the Wasabi Rival's distant descendant, who used the power to renew the Wasabi's feud with the reincarnation of the Cherokee Leader (i.e. Chris).

At first, Wes-Li Sonichu used his powers to avenge the Wasabi's failure to steal the Cherokian Crown, until Chris-chan Sonichu and Saramah Rosechu convinced him to help them defeat Count Graduon. Since then, Wes has abandoned all pretense of honoring the Wasabi, and appears to be using his powers for his own selfish interests.

Given the fire motif of Wes-Li Sonichu's powers, the name "Wasabi" was most likely Chris's idea of a clever reference to heat, since wasabi (a.k.a. Japanese horseradish) is a hot, spicy condiment (though given Chris's way of doing the research this could very well be a coincidence). The fact that wasabi is a Japanese word, coupled with the protologism "Cherokian", demonstrates Chris's utter ignorance of, and indifference to, Native American history and culture.

In point of fact, Chris knows very little of Wes Iseli beyond his romantic relationship with Sarah Hammer (his age in Sonichu #2 is listed as simply "??"). While Wes may indeed have some Native American ancestor, Chris arbitrarily assigns him one in the comic to make Wes a more suitable archnemesis.