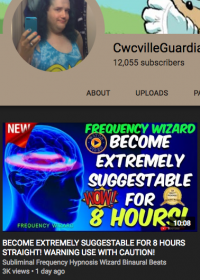 Chris felt he needed to be more suggestible.

In early 2016, Chris began watching YouTube videos from the channel Subliminal Frequency Hypnosis Wizard Binaural Beats, in an attempt to deal with his gender dysphoria and improve his health for free and without any sort of effort. He has liked a grand number of videos — per instructions on the video description — and has left several comments on them.

His belief in the videos culminated on 15 July 2016, when he naïvely believed that a vagina was growing within him due to the videos, and cut his taint open with a knife to "free it". Despite being told to see a doctor after his announcement on 24 July, and acknowledging it as a wound, Chris continued to have faith in the videos, liking a video called Super Biokinesis Booster on 27 July.[2] Almost one year later, on August 5, 2017 he made it obvious he had learned absolutely nothing and claimed he believed he was developing psychic powers thanks to the videos.

While binaural beats can have a calming and/or meditative impact on the listener, there is no sort of evidence or proof that listening to them can do things like make you lose weight, or turn your penis into a vagina, or help you produce farts that don't stink.

The Subliminal Frequencies were featured in the Sonichu comic in July 2017, well over a year after Chris originally began listening to the tracks.

Note: Chris had made a comment on 5 April, suggesting that backgrounds of videos have images with "differing spiral and background colors." That was the case with this video.

Note: "Six months" is a quote from the video description.

Getting rid of autism

Chris discussed a video titled Subliminal Affirmations for Easing Autism Symptoms in a video on 29 June, claiming to be cured of his autism.

A Message To ALL From Frequency Wizard

Note: Chris made this comment a few days after apparently being persuaded to follow medical advice to heal the wound he had mistook for labia growth from listening to the channel's videos.

Chris has liked many videos. Most of them proclaim to be for various methods of MTF transitioning. However, he has liked other videos, such as:[20] 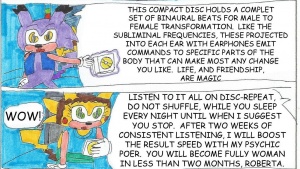 The Frequencies are mentioned in Sonichu #12. Magi-Chan loans a CD of them to Robbie Sonichu as a means of transforming her into a transwoman. After two weeks, Robbie's breasts grow from a B-cup to DD. After six weeks, her "part M shrank, and part F opened", completing her transition.