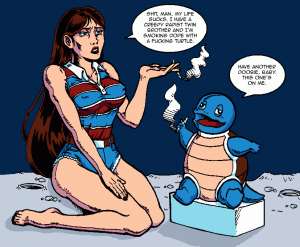 Crystal buys all her weed from Yawning Squirtle.

Yawning Squirtle is arguably Chris's only creation that isn't complete shit. First depicted on page 59 of Sonichu #8, stoned out of his mind, Yawning Squirtle easily appeals to Chris's weed-loving trolls. Also, for whatever reason, Chris made this character, despite his undying hate for illegal substances. 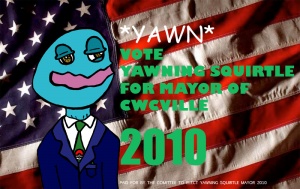 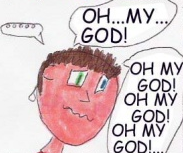 Chris, after trying some of Squirtle's secret stash.

On at least three instances, Chris has tried to downplay Yawning Squirtle's importance in the comics. Chris has later stated that he assumes that YS is fighting for a trainer now.

Fans strongly disagree with this interpretation, opting for Sean August Watley's Moon-Pals depiction of Yawning Squirtle spending his days on The Moon getting high with Metal Sonichu, Boulder-Dropping Whale and Bill the Scientist.

In the CWCipedia article on Bubbles Rosechu, Chris further expanded on the character by stating that he was a childhood friend of hers. It's unclear if this will lead to Rule 34 art of the two anytime soon.