Kathleen is Jason Kendrick Howell's now ex-girlfriend, whom he dated for a while when he was twenty years old, and when she was in her late teens. Kathleen has never met or even interacted online with Chris before, but due to her association with one of his arch-enemies, Chris still managed to give enough of a shit about her to write letters to her and include her as a villain in the Sonichu comics.

Upon finding out that Jason was the creator of the Chris-Chan page on Encyclopedia Dramatica, Chris soon convinced himself that he was also the mastermind behind all his recent troubles on the Internet and the head of all trolls. Becoming obsessed with his new enemy, Chris began an exhaustive investigation in an attempt to find some kind of dirt to use against Jason, a tactic he would later also try with Clyde Cash, resulting in the infamous blackmail videos.

This eventually lead to Chris discovering Kathleen, and he concluded that when Jason was 20 years old and dating her, she was only 17 years old. Chris began announcing this wherever he could,[1] essentially accusing Howell of committing statutory rape. Chris's charge assumes that Jason and Kathleen had sexual intercourse during this period, and that they did so in a state where the age of consent is 18, since in many American states the age of consent is 16 or 17. Of course, Chris is barely even aware that there actually exists a world outside Virginia, having only left the state a few times in his life, so it is unlikely he knows about this.

And of course, there's the matter that if, indeed, they were having sex and Kathleen was legally underage, the difference is small enough that most people would find no problem with it. But given Chris's narrow minded nature and rigid and literal interpretation of the world around him, he was far more concerned with whether it was illegal rather than whether it was an abusive relationship. His attitude towards their relationship also seems to contradict his other opinions on "Women's rights."

Chris would ironically attempt to pursue relationships with women roughly half his age in 2021.

Eventually, Chris's infamous counterattack on ED backfired on him spectacularly and caused Megan Schroeder to cut off all contact with him over an image Chris drew of her which he uploaded to the site. Nonetheless, Chris's inability to admit fault led to him deluding himself into believing that it was the trolls who broke up the closest thing to a relationship he ever had, and he decided to take his revenge on Jason by sabotaging his relationship with Kathleen, just as he believed Jason had done to him and Megan. This never actually came to fruition, because Kathleen and Jason had already been apart for quite a while by the time Chris began conspiring to break them up.[2] That didn't stop him from trying however, and he sent Kathleen a long email to inform her of his grudge against Jason, despite having never met her, talked to her, and her probably not even knowing of his existence.

The email is as follows:

In essence, what Chris has done here is email a random woman who doesn't know who he even is and tell her that her boyfriend is an asshole, seemingly blames her for what he has supposedly done, says that her relationship with him was illegal, and speculates that he may physically or emotionally abuse her in the future. Most women would probably react less than kindly to a message like this even if talking about an ex, if not to defend their ex's character then most certainly because of Chris's condescending tone, but according to Jason himself, Kathleen never really did read or respond to this email, and so continued to remain unaware of this random internet retard who for some reason knew all about her.[2] 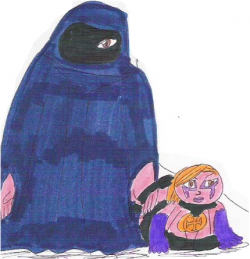 Still better than being Allison Amber.

As part of his continued smear campaign against Jason, Chris included both him and Kathleen in the Sonichu comics, beginning with a brief cameo in Sonichu #7 and later getting a proper introduction in Sonichu #8. Like all of the characters Chris bases off real-life people and events, his embellishments say more about himself than the target of his "satire". For example, he refuses to believe that a minor would willingly engage in an "illegal" relationship with a "bully", so Chris depicts her as a slave, apparently forced to endure Jason's odious presence. Kathleen was initially dubbed "Jason's Woman Slave", and drawn with a strange BDSM costume sometimes seen crying tears of blood.[3] She never actually said or did anything in either issues, both times just standing by and watching the fights between Jason, Sonichu and Rosechu with general disinterest.

Rightfully so as well, because despite Jason outright confessing that she was his sex slave, neither of the heroes make any attempt to save her, only concerned with their own personal vendetta against Jason. In fact, even when Jason is actually defeated at the end, they still leave her chained up with him, as if forgetting she was ever there at all. Rosechu even later went on to strip for women's rights, but not inspired by Kathleen's plight or anything. She never even comes up. The entire demonstration is all about how Rosechu was falsely portrayed as a hermaphrodite, because apparently that is worse than slavery.

Chris apparently believes that everything Howell does is "illegal in these 50 states". However, a quick google search would tell you that Age of Consent is 18 in only 10 out of 50 states. However, seeing as Virginia is one of those states, it's likely Chris didn't know or care.

Later, advised by Jay Z during the Miyamoto Saga, Chris made some edits to his comics and retconned all instances of real life people included in the comics being called by their real names. Chris never actually changed their names like he did with other characters, but he did vow to only ever refer to them by first names from thereon.[4] During the changes, Chris also retconned away the unfortunate subtext about sexual slavery, changing Kathleen's title to imply her being a willing accomplice to Jason rather than a slave, although the bondage gear remained intact. This makes Rosechu seem like less of a bitch, but it also unintentionally retcons an innocent woman into a villain, despite her never having done anything to Chris IRL, or even knowing who he is.

This may have been unintentional however. Even after her being changed to an accomplice rather than a slave, Kathleen still never did anything villainous. She remained by Jason's side, saying and doing nothing as always in her next appearance, as Jason takes the both of them away from the action in an escape pod when Chris attempts to destroy 4-cent_garbage.com building with them still inside during Sonichu #10. Before leaving the other trolls to all die, Jason announces his retirement from trolling, his apparent conversion to Christianity, and his intentions to go out and marry Kathleen and live a quiet life in the suburbs with her.

It could be interpreted from this that Kathleen may not have been a criminal accomplice, but instead a kind of companion for Jason in the retconned comics, so maybe Chris never really did intend to retcon her into a villain. After all, the real life Kathleen never did anything bad to Chris at all, and in fact shared no interactions with him whatsoever. Why would Chris need to demonize her too? For these reasons, it seems Chris decided to let go of his need for revenge on Jason for once, and actually give one of his villains a happy ending, letting him retire in peace and letting Kathleen have a normal life with him.

Then Chris was forced by Jackie to rewrite the ending to Sonichu #10 to make it less needlessly violent concerning the Asperpedia Four and give them a happy ending, so when Chris made the Book10Replacement in which the four survive their unfair trial and are sentenced to living life in the Amish community instead, Chris had to find a way to fit in that little extra bit of pointless cruelty, so the retcons also show Mary Lee Walsh in prison following her defeat by Collosal Chan, and she is then joined by Kathleen, who is revealed to be her new cellmate. We learn from her that she had been cheating on Jason with a 4-cent secretary for a while, and after the two fled from the collapsing building, Jason found out and they had a fight, leading to them breaking up, Jason dying by crashing into a mountain somehow, and Kathleen going home to get high on marijuana. She was subsequently caught by the police and for some reason placed in the same cell as a dangerous terrorist. She also reveals that she had tried to smuggle weed into the prison by stuffing it between her breasts and up her asshole, but that the police had still somehow found it.

Why Chris ever felt the need to add this part is unclear. As has been said numerous times in this article, Kathleen wasn't even someone who had made an enemy of Chris in real life like the Jerkops or Mary did. Kathleen was never even aware of Chris. Yet somehow Chris saw fit to depict her as a sex slave, a depraved druggie, and an adulteress, and ends the series by putting her in prison. Your guess is as good as ours here.

So what was Kathleen's reaction to all this you may ask? Quite simply: Nothing. As far as can be told, she has to this day still not ever read the Sonichu comics or Chris's email, and remains completely unaware of the entire Chris-Chan phenomenon. When Jason joined Vivian by providing his own voice for the Audiobooks, he also made several episodes of commentary over the Official Videobooks that Chris made, where he confirmed that he and Kathleen had already broken up by the time Chris started including them in the comics, and Jason had never bothered to tell her about anything Chris had done involving her.[2]

All that can be said, is that if you one day googled yourself and discovered that some fat autistic manchild who you've never met or even heard of before had written a story about you being a sex slave to your ex, hiding marijuana up your ass and being thrown into prison with an old lady who's wearing a horned helmet, imagine what your reaction would be. It's a safe bet that Kathleen's wouldn't be much better.