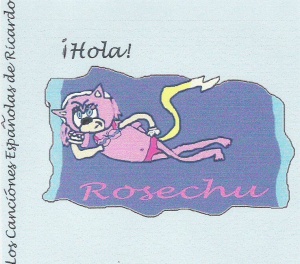 Chris's Rule 34 goes back to the origins of Sonichu and Rosechu, where he drew crude images of Rosechu.

Sonichu and Rosechu's Luv Shack is the Rule 34 section of Chris's Sonichu site founded on 12 February 2009. Chris most likely took the name from the 1999 South Park-themed video game Chef's Luv Shack. While many would think this is simply a ham-fisted attempt to continue his "protest" against ED, he's actually just trying to get us to open "NEW CREATIVE DOORS" artistically and spiritually. Who knew horribly drawn chinas colored in with magic markers could be so illuminating?

Several people noticed, before the site's sudden death, a "For Girls" section, essentially either requesting or alleging solo or homoerotic Sonichu artwork.

In a post on the Sonichu Girls forum from early January 2009, Chris posted:

If you all will recall, I had mentioned the idea of creating a one-time magazine of pictures of the Rosechus (minus Zapina, since she's underage) being sexy in underwear or naked, as a protest of mine against the ED jerks who drew dicks on my female characters and women in general; the heinous, slanderous act still infuriates me. But I withold my rage. A Sonichu Girl asked me when I was going to draw the comic of the Rosechus stripping in protest, so I felt I should put it to a popular vote.

Would you all like to see the multiple pages of the Rosechus being sexy in underwear or naked in the protest against those jerks in the Playboy parodied magazine, or do you all feel I would be crossing a line doing so?

If the popular vote is good, I will draw up the magazine either before or after drawing and coloring my #9 Comic Book, depending on how I feel. I'll make my decision based on the popular responses after a week to a month's time.

Thank you all again for understanding my true meaning behind the stripping protest. :)

All the TRUE and LOYAL Sonichu gal fans supported Chris's idea and alongside support from "fans" in Mumble, Chris made the site. The Luv Shack went online on 12 February, becoming part of Sonichuandrosechu.com (the third domain that hosted Chris's Sonichu site, which he had acquired and set up earlier that month).

On the age check for the site, he says that the images "may open new creative doors within your mind". This means that Chris actually believes that looking at terribly-drawn pictures of nude Sonic recolors will make you a more creative and spiritual person.

Chris kept the sub-site very up to date, adding "adult" versions of his comics all the way up to Sonichu issue #9. For a time, the Luv Shack was updated almost as often as the Sonichu comics themselves, although Chris left out some well-known material from the collection (such as the Giant Penis Comic).

When Chris relaunched his site in April as CWCville.com, he broke several links to the Luv Shack, but the gallery was still available via the old domain name. After the site was repeatedly hacked in May, however, Chris eventually gave up and allowed it to lie fallow. During the CWCipedia's lifespan, it didn't have any section like the Luv Shack, and hosted somewhat less explicit versions of comics like Sonichu 8.

Images from the Luv Shack (or: Abandon All Hope, Ye Who Enter Here)