This page archives tweets from Chris's sockpuppet account, NightStar2891. Messages are color-coded green for Chris's main CWCSonichu account, blue for the NightStar2891 alt, and red for various trolls and other Twitter users.

Concurring with Chris on Doopie

Chris then changed NightStar's profile to read: "I am a UVA graduate with a degree in psychological arts. Until I get my own office, I am working between McDonald's restaurants." The location and birth date was given as "Charlottesville, VA" and "Born in 1991."

Apology for Doopie and Tabitha

Chris revealed that he was, in fact, NightStar. He tweeted a handwritten apology letter to Doopie and Tabitha St. Germain, along with custom drawings of MLP OCs for them. Both women had blocked him on his main CWCSonichu account - Doopie for his creepy behavior and Tabitha for the swarm of trolls that follow him and end up in her Twitter timeline.

Doopie was not pleased:

Chris persisted, wanting to have the last word:

Directly following the events of the previous tweets, a ween replied to the Tabitha MLP drawing, tagging Tabitha St. Germain:

This got Tabitha's attention:

Chris liked Tabitha's tweets, then decided to launch into a 21-tweet essay, in spite of Tabitha having repeatedly said, just then and to Chris's CWCSonichu account on 3 August, that she does not appreciate people cluttering her Twitter feed with Internet drama:

A troll questioned how Chris could have thought NightStar would have fooled anyone:

Role-playing how to use dear and darling

After getting scolded by LadyOfTheCosmo on Twitter for calling her dear, Chris used NightStar to demonstrate how "dear" and "darling" should be used and interpreted.

Chris then reacted to the people expressing incredulity at seeing him essentially talk to himself:

See how Christine is supportive, not harassing; unblocking everyone 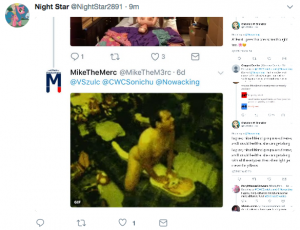 One set of the screencaps.

Chris then tweeted 101 screencaps of comments between himself, the women who blocked him, and many weens.

He then tweeted, via CWCSonichu:

Afterwards, he used both the NightStar2891 and CWCSonichu accounts to address commentators:

The Man in the Pickle Suit entered the fray as Howard Winslow.

Chris retweeted the above and replied.

Chris retweeted the above and replied.

Chris retweeted the above and replied

Chris retweeted the above and replied

Lonely and conversing with himself

In response to CWCSonichu's post on being lonely, NightStar tweeted an image of Chloe Price crying. CWCSonichu liked the tweet[1].

The account's final tweets (from September 2017 to December 2018) are primarily responses to people Chris is following. Most notably, from August 2018 onwards, Chris tries to communicate with a member of the brony analyst community. Chris's last tweet was from 24 December 2018, as follows: