This page is an archive of Chris's major social media posts during June 2019. Posts are sorted by date. Notable comments are included and color-coded for reference. Posts color-coded purple are made while Chris is roleplaying as Magi-Chan.

To which Chris Responds:

Chris gets a Fan Trade

Thank you for Being Autistic, Chris!

I'm sure this will go well

[Archivist's Note: It took Chris 4 hours to break his own rules]

In a response to a now-deleted one of these by another twitter user, Chris writes:

Chris Engages with a Ween on the Dimensional Merge

A day Later, Chris follows this up with:

Chris Maintains his vendetta against the Farms

Chris wants to reconcile with Manchester High and the Cwcki's domain

Chris Was Too Distracted To Ship Patron Books

Chris says, according to Jesus, dimensional merge will be finished soon

See also: Pewdiepie Does Not Live Here; He Lives In Sweden

[Archivist's Note: If you're the idiot doing this please stop, you're not funny.]

Believe in OCs and Deities

See also: Believe in the OCs and Deities!

All Sonichu Issues for Sale!

Chris tweets a message from his Magi-Chan sockpuppet

[Archivist's Note: These are posted as screenshots but ya boi has a follow on Magi-Chan too so it's being dropped as text here]

CommodoreDreamcast and word of the day!

Chris gets into a scrap with Doopie's fiancé 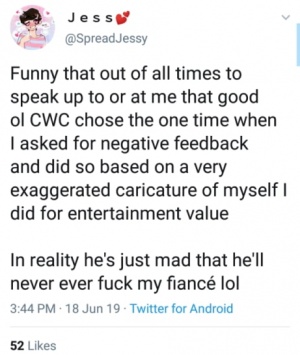 5 minutes later, a response from Chris:

Jess comments on the above mini-rant:

And later tweets a response separately:

Commodore and Dreamcast have the same logo?

However, just hours later, Chris realized this was too honest and deleted the tweet, instead tweeting out:

Chris gets a good night’s sleep

Magi-Chan says the end is nigh

On this date, Chris removes the protected status on his Twitter after 4 months. This means:

Chris claimed to have had a heart attack through his MagiChan111448 sockpuppet account. However, it was likely to have been a case of heartburn, based on a Sonichu 14 page in which he describes how his doctor referred to it as a gastro problem and advised taking Tums.

[Archivist's Note: Giving aspirin and tylenol for a heart attack is like giving a band-aid and a pat on the back for chopping a finger off.]

[Archivist's Note: This tweet is the one that caused me to enter such a state of confusion that I got a headache. Chris seems to have completely disregarded the whole heart attack thing.]

Magi-Chan says pray for (and to) Chris

In response to commenters confused as to what the video is actually showing, Chris later clarifies:

[Archivist's Note: After further review, it appears as if a combination of subtle shaking and Chris' index finger causes the motion.]

Chris begins work on the comics!

[Archivist's Note: The public Patreon post is also archived below.]

[Archivist's Note: While it at first appears that Chris is assuming that the PokéDollar is a fake currency and that everything is Yen and USD, the Japanese use 円, which is the kanji for Yen.]

[Archivist's Note: Some of the image files are in .heic format which is not supported by this wiki.]

Chris has issues with Pokemon Go

[Archivist's Note: interesting thing to note about this tweet is that Chris' usual "signature" (⚡️💙⚡️) is missing.]

Proof of the Merge?

How to Lucid Dream again

[Archivist's Note: This later comment chain occurred on July 1st but as it is a reply to this tweet for the sake of simplicity I have put it here.]

Trickie allows use of Rosechu's Story

Trickie, the Original Creator of Rosechu's Story, tweets an announcement: