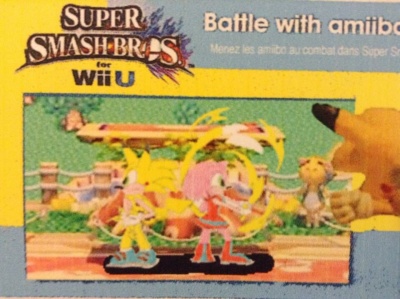 The premiere episode of the new My Little Pony: Friendship is Magic season had a strong influence on Chris.

In response to a question posted on the "Equestria GIRLS - MLP" page, "What'd you folks think of the premiere?," Chris wrote:

On his own timeline, Chris shared a photo from the new season and wrote:

Chris announced a new product for sale on eBay.

More on the Amiibo

In the included illustration, Sonichu sez:

Kenneth Englehardt provided the link to the Nintendo voting page, to which Chris replied:

On 12 April, Hillary Rodham Clinton announced that she was running for president. In response to the announcement on the "HRC" page, Chris wrote:

Someone presumably unfamiliar with Chris replied:

In Defense of Giraffes

On 12 April, Chris's friend Kenneth shared a photo depicting a woman proudly displaying that she killed a giraffe, which Ricky Gervais negatively commented on. Kenneth commented:

Disney Infinity is Just as Generic as His Opinion Is?

Pinkie Pie on a Steamboat

Chris was amused by a fan art submission on "Equestria GIRLS - MLP," and commented:

In the drawing, Rosechu is saying:

A Dame in Deir Crap Shack

On "VA Pride," Chris found an article discussing a recent episode of Ellen DeGeneres's talk show which dealt with transgender awareness. He added his thoughts:

The Happiest Place in the World...or Not

Chris found an article on the "VA Pride" page claiming that Richmond, Virginia was the happiest city in America. He responded:

Chris shared a photo from the "Sonic the Hedgehog" page and wrote:

Confound Those Blarms, They Drive Me to Drink!

An article on "Tails' Channel" noted that there might be a second season of the Sonic Boom TV show. Chris predictably commented:

Chris read an article on "My Nintendo News" that Nintendo was introducing a Minecraft rip-off called UCraft for the Wii. He responded:

On 20 April, Chris finally officially changed his Facebook name to "Christine Weston Chandler," with "Christian Weston Chandler" in parentheses. He also updated the Basic Information section of his profile to clarify that his gender was "Lesbian TransWoman: Female, Lesbian Soul in Male Body," and that his preferred pronoun was "she." Under Religious Views, after "Baptized Methodist," he wrote, "Some serious; delightful to know and talk about," whatever that means.

The following day, Chris added a new profile photo with a couple of hashtags:

Chris reviewed AnimatedJames's "Some of Episode 2" video from his show C Students, and commented:

On 21 April, Chris signed a petition on Change.org to get a pardon for Kayleb Moon-Robinson, a sixth grader with autism from Virginia who was arrested, handcuffed, and charged with a felony. Sound familiar?

Chris shared a photo from the Human Rights Campaign and wrote:

Chris shared a video from NBC Nightly News about a five-year-old transgender child and wrote:

In the third of his weekly series, Chris discussed how he'd like Black Sonichu to be integrated into Super Smash Bros.

Chris's high school classmate Richie Grecki posted a photo of his mother's gravesite and wrote, "My mom passed away 5 years ago today. R.I.P. Mom, I love you." Every single person who commented on this post offered Richie emotional support, except one:

Who's on First in the Wonderbolts Academy 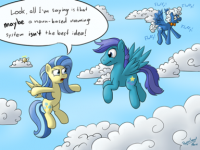 On "SEGA Nerds," Chris read an article revealing that Sonic Boom was originally supposed to be called "Sonic Synergy," and that Sonic's arms were still going to be tan. Chris wrote: