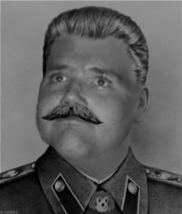 General Secretary of the True and Honest Sonichism Party, Christian Weston Chandler, seeks out and eliminates all reactionary Liquidist-Cashist-Spikist tendencies.

As a result of his massive ego, Chris is very insecure about others' opinions regarding him and his work. This has led to him censoring out various comments and remarks from trolls and innocent bystanders alike.

In the Mailbag, Chris's desire for censorship stems from his belief that since it is the "Letters to the Editor" section of his website, he should have complete editorial control over it. Chris believes that such behavior is commonplace, as he accused Alec Benson Leary of doing the same thing in his Mailbags. He is unaware that it makes him look like an insecure tyrant.

Chris has been censoring events since day 1. Before his encounters with the trolls the majority of censorship in the comic has been indirect, recreating heavily distorted versions of real events in an attempt to make him look more sympathetic and heroic. It's not until the trolls began to pester him that other forms of censorship begin to emerge and eventually take over the comic.

Chris has a consistent standard as to what he censors: swear words and what people tell him to censor. While early Sonichu comics have extremely bizarre and strange minced oaths, more recent issues have added actual swearing, which has been clumsily censored out. This goes for anything from "fuck", which is understandable, to extremely mild almost-swears like "crap", which shows like Dexter's Laboratory and Hey Arnold! can get away with anyway (indeed, censoring the word makes it look far, far worse). Chris obviously has no problem with even the worst swearing, so we can assume he's doing it for the sake of the children reading the comic. Which is really strange, because even when censored the inclusion of such language would still be inappropriate for a comic designed for young children. He could just as easily have used harmless expletives like "consarnit", and he has never voluntarily removed other objectionable content from his comic, such as:

Presumably, if he were left to his own devices, Chris would have no problem exposing his hypothetical 7-year-old-and-up audience to "sexy" anatomy lessons.

Notably, the comic contains and has not yet censored:

You know, nothing that would be out of place on an episode of Power Rangers or Pokémon.

When called on this, Chris blamed the Federal Communications Commission for not stopping him from doing so. However, the FCC does not have authority over the Internet or print publications. Even if they did, they do not pre-emptively censor everything that is said on TV or radio, so they cannot stop anyone from saying anything; they will only fine you afterwards if someone files a complaint. With or without FCC's influence, the system is built on self-control, which Chris has problems with.

The censorship for Chris's website is even more thorough and entrenched than in the comic. Like in the comic, he censors any swear word, regardless of how mild it is, while leaving every other horrible thought that comes out of his head unedited. The only things Chris likes to edit are other people's words.

Perhaps the most disturbing censorship comes with the Mailbag. It didn't take long for Chris to start gutting the Mailbag, first simply depositing questions he didn't want to answer in the "rejected" mailbag, then planting rejected letters into the "to be answered later" mailbag when called out on rejecting letters, then straight-up erasing letters from the page in hopes nobody would figure out they existed. The most insidious edits (as far as Chris can achieve insidiousness) are his editing of questions and letters, in varying degrees of severity. Usually, this is to bring letters in line with his self-serving moral standards, to remove opinions he disagrees with, to turn criticism of his comic into fawning, to turn approval of Asperchu into approval of Sonichu, or just to try and make his latest stupid point as hard as he can.

Interestingly, he is quite fond of striking out and replacing parts of letters with bold text, like a child scribbling over something he doesn't like. It's unknown whether he expects people to ignore the stricken parts of the letter, to agree with his righteous fury, or if it's just for tantrum-like emphasis. He does the same thing when editing his ED page, so perhaps he just assumes we're all on his side.

Chris has an unpleasant tendency to refer to himself as the captain of the CWCipedia, and the trolls as assorted foes trying to bring him down. His actual level of control is of course negligible, so regardless of how disturbingly tyrannical his actions seem, he is so completely incompetent we should be glad he's not any smarter or in anything even vaguely resembling a position of power.

In June 2010, Chris began playing with the DSi game Flipnote Studio, and posted his own Flipnotes on the website Flipnote Hatena. His works consisted primarily of the standard CWC fare: unfunny attempts at humor, ripping off other people's works, rambling comment posts, the ubiquitous plastering of Sonichu's face wherever possible...and graphic depictions of his wet dreams. That last part refers to one particular "work" that Chris posted on his account that would cause him to run afoul of the Flipnote Hatena administrators: RomanticLabyrinth. Essentially a retelling of said sex dreams, it violated some of the core rules of Flipnote Hatena in that it was sexual in nature. Chris, never being one to read or care about rules, was of course outraged when he discovered the animation had been removed by admins. He promptly reposted a hastily censored version of his work. When this too was removed, Chris again posted the censored version, only this time with a ranting call for admins to leave his work be and instead divert their attention to the trolls that were supposedly harassing him on his comment page. This third upload was soon banned. He would go on to upload this Flipnote three more times, the fourth time leading to his first ban.

When it comes to Chris censoring himself, it's a difficult thing to actually pin down. It can be said that Chris has learned to put a filter on himself. This is often seen on his website, where he types any swear words he wants to use as the first letter of the word and a series of asterisks (example: f***, a**, etc.). He knows he has to stay "Family Friendly", but he's too angry to go with inoffensive cusses like "Oh, nuts", so he uses implied swearing as a sort of extremely stupid middle ground. This has resulted in some very unusual quotes, such as...

During Chris's early net days, nothing was too candid for Chris to mention: his attraction signs, telling people that he was a virgin with rage and he was searching for a boyfriend-free girl to build into a sweetheart. All of it was fair game. However, the trolling attacks on him have started to teach him that not everything can and should be said.

Of course, with Chris, trying to get him to stop mentioning things is akin to smacking a dog with a newspaper when it does something bad--you have to keep doing it over and over just to get him to learn. Case in point: when the CWCki exposed the Wallflower to Christorians all around the world, she approached the site to get the page removed after learning what it contained. However, Chris not only took it as a victory for himself, he would still drop both of her names even a month afterward. Even worse, when Chris snatched the article for the Wallflower from the CWCki and placed it on the CWCipedia, Chris removed the part that described how the CWCki was respectful to the Wallflower's privacy.

Chris's views on censorship are skewed at best and hypocritical at worst. His comic is easily the best example of Chris's odd views. Panty-shots, sex scenes, "stripping for women's rights" - all of this stands in sharp contrast to Chris's unwillingness to push the extra mile on violence (especially when it comes to killing characters) and the rampant "bleeping" of swear words. In fact, Chris's hypocritical actions mimic that of another famed troll-target, David Gonterman, whose misogynistic, homophobic and racist comments and actions clashed with his attempts to paint a family friendly world. For someone who wants to have his comics published across the world, he's doing a poor job convincing people that he has material that's publishable - on top of the rest of the evidence against him.

The evidence suggests that Chris only censors what he doesn't like. He doesn't like character death or explicit violence, unless it's directed at the trolls who've angered him the most, or if he's being "True and Honest" about some past pretend-girlfriend suddenly "dying". He doesn't like swearing, unless he's dropping F- and N-bombs on his enemies. He really likes female nudity and can't stand (for one reason or the other) male nudity that isn't his perfect and immaculate body on display—and so on.

In Chris's eyes, he thinks this is being "True and Honest," just like everything else. However, because of his autism, he just has no filter for these sort of thing, and because he's such an unmotivated slug, he's never bothered to learn what's appropriate and what isn't. Thus, he sees no problem uploading videos in which he ran around naked, threatened violence towards others, or generally behaved like an ignorant jackass. Likewise, he only edited out the sex and nudity of Sonichu when Pretend Miyamoto made him, and continues to upload his sexual Flipnotes in blatant defiance of the mods.

Chris himself hasn't spoken out much on censorship beyond a disdain for the censorship of female nudity and complaints about the violence and swearing in Asperchu. If he ever did release his thoughts on the issue of censorship, one might reasonably assume he'd reiterate annoyance at "those dumb laws" while demanding men wear bras, homos kindly die, and that more violent games include "no blood or gore" options a la Brutal Legend. The reasoning behind this should be obvious—because that's what he wants.