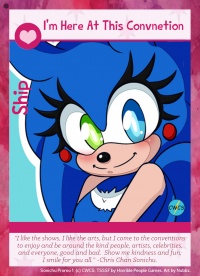 Chris has also shown a number of times that due to his facade of kindness to others, he can very easily be manipulated by other people, as he rarely questions anyone's intentions beforehand, as that would be the "unkind" thing to do. This shows that Chris seems to have a stronger appeal to just being kind to people for its own sake, rather than so that he can be more approachable, as he cannot distinguish when it is most appropriate to accept an offer vs politely declining it.

Origins of his kindness

Given his obsessions with fictional media, and what we know about his formative years, it's very likely that Chris learned much of his ideals and how to act towards others from watching television as a child (note that Chris once stated on a school assignment that he considers TV an effective part of child-rearing[2]). Among 80's cartoons like Transformers and The Smurfs, he has specifically cited Care Bears[3] [4] and especially The Adventures of the American Rabbit (his first role model before Sonic the Hedgehog[5]) as influences.

This might also explain why Chris preaches the importance of virtues he has demonstrably failed to live up to for years (and still does), sees the world with simplistic black and white morality, resists anyone telling him hard truths because they don't sound nice and sympathetic enough, easily latches onto anything seemingly beneficial to him without a second thought and so forth. His tendencies toward binary perception presumably didn't help one bit either. 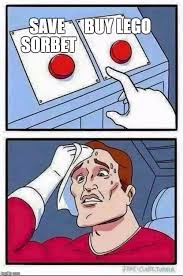 Like his beliefs on religion and gender, Chris's stance on morality is difficult to interpret. Chris often claims that he is a kind, good-natured, saintly person that doesn't deserve scorn. To a certain extent, he's right, but for all of the wrong reasons.

Despite what one may think about Chris, the reality is that he is relatively harmless and is somewhat capable of distinguishing right and wrong. But that is only scratching the surface, as Chris's selfishness and naivete often turn out to be the main culprits behind him doing immoral actions, rather than true malevolence.

One infamous example of this behavior is when he foolishly drew and uploaded SheCameForCWC.jpg onto Encyclopedia Dramatica as a means to combat all of the pictures of ducks and pickles he found on the site, as well as to prove his straightness, not thinking about how Megan might respond to being depicted in such an undignified manner in a shoddily drawn piece of porn. Megan, who was looking for just about any reason to stop talking to Chris,[6] was understandably revolted. However, what cements the fact that his naivete was partly responsible is how Chris tried to explain to Megan what happened in the picture itself, thinking that she was inexperienced with sex, and didn't understand what was going on, rather than the obvious fact that she was depicted in such a demeaning situation, and that Chris obviously wants to pound her.

Whoever Chris acts kindly to depends on who he would classify as his "friends" and his "enemies". If someone gets in the way of whatever he wants to do, or he shifts the blame on someone else for his own fails, Chris will deem that someone as a troll that wants nothing more of him than to make him miserable, showing very little respect of whoever inconvenienced him. Whoever Chris doesn't classify as a troll or feels "temporarily" joined the side of the trolls are his friends. Typically, Chris will attempt to befriend internet celebrities and staff members of the media he enjoys.

His dubious (if virtually nonexistent) ability to empathize has also led him to denounce most anyone with whom he had a conflict as mean, heartless or even flat out villainous, irrespective of all evidence pointing towards responsibility for turmoil falling on him. Despite fervently chiding them for allegedly lacking a heart, he often neglects to take their thoughts and feelings into consideration himself, preferring to instead jump to conclusions just because they happen to deviate from his extremely simplistic ideals (not to mention deny him what he feels entitled to have). 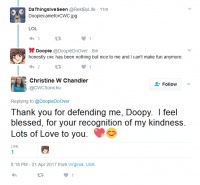 As mentioned above with the Doopie saga, Chris has a tendency to believe he is doing good when in reality, he isn't. A common motivation for doing what he believes to be good is so that he can 'defend' someone he thinks is close to him; Chris has demonstrated this numerous times with Troll-created Sweethearts, such as attempting to 'defend' Julie from Clyde Cash in voice chat sessions, then driving all the way to Cleveland in his belief that she would be there. Chris has also attempted to shift the focus of Weening against Doopie to himself in his Twitter campaign, when in reality the situation, far less serious than he thought it was, could have been resolved had Chris simply quieted down.

In other instances, Chris will only act kindly to people to avoid getting into trouble. Whenever he tries to apologize to anyone, it's usually for reasons such as getting his PSN account back, or in an attempt to get back into places he was banned from.

During Liquid Chris saga, Chris wanted to get Liquid arrested, and therefore placing him in prison. However, after talking with Kacey, he decided that he "would hate to see you in jail, out of respect, and of care, because she would be heartbroken."[8] It's worth mentioning that only a few seconds later, he threatens to get him tried in court, so this should be taken with a grain of salt.