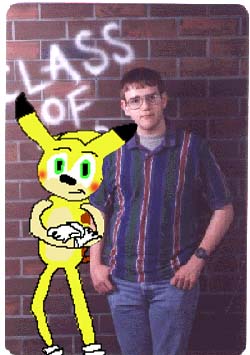 Chris and Sonichu in the Good ol' days!.

Nostalgia is a sentimental longing or wistful affection for the past, typically for periods and/or places with happy personal associations. It is associated with a yearning for the past, its personalities, and events, particularly for the "good old days" or childhood events.[2]

The foundation of much of Chris's adult life has been his fixation on the past, especially for things that have had deep significance to his life in order to escape from the present, whether it be through cartoons, interacting with past gal pals and sweethearts, or reminiscing past experiences with trolls.

Although viewed as a mental disease when it was first discovered, nostalgia, in the modern age, is seen as a natural, common, positive emotion for escaping the confines of reality. Seeing how difficult it is for Chris to grasp reality as it is in its present, the way he grasps the past is unimaginably worse.

Chris' nostalgia comes from a wide variety of sources. It can be speculated that the main source of Chris' nostalgia in unhealthy amounts is his stress. At a psychological level, nostalgia is the result of negative feelings and results in the increase in of one's positive emotions.[3] It can also be used as a coping mechanism for dealing with whatever stressful situation one may be in.

Given how Chris currently lives his life, constantly dealing with weens, and being denied china by every girl he meets, Chris will sometimes use his past experiences in a strange way to relieve his stress. For example, at the end of the Jessica saga, Chris, feeling awfully depressed from losing his girlfriend for the umpteenth time, decided to contact Megan on her Facebook, and hook up with her again,[4] even after having been accusing her of being behind his current situation for the past four years.[5]

Other times, Chris will hold onto past experiences that gave him grief. For example, before attempting to contact Megan ever again, Chris always held onto how Megan was somehow responsible for his problems in his life for supposedly leaking information of him on Encyclopedia Dramatica with Mimms and Lucas. This attachment to such events can become so strong that eventually, Chris will snap from all of the added stress. For example, in several 2013 September Facebook posts, Chris continuously curses Megan along with other fruits of his bad memories.

Anemoia: nostalgia for a time before Chris was born

As with many people, Chris also experiences nostalgia for media released before he was born. Much like a modern kid who loves 80s music and will tell you all about how Queen is the best band on the planet, Chris has a liking for I Love Lucy, Gilligan's Island and other media released during Barb and Bob's time. This is common for people who spend more time around their parents than they do around their peers.

Chris and his childhood

When it comes to nostalgia, people tend to cherish in it in order to relive a far simpler time – while this is perfectly normal in most people, Chris's obsession with his past takes this normal aspect of the human psyche and twists it to pathological degrees. Chris revels in his childhood memories and perusing child like fantasies to fill up the stressful parts of his life, purely to ignore them.

After getting a bear hug at the 2018 MAGfest from a fan who lifted his 212+ pound body off the ground, Chris commented on the nostalgia he felt, saying, "Hey, did anyone get video or photo of @Spinalpalm hugging me and lifting me up high after the Panel? I would love to have that video to watch over and over. I never thought I could ever be lifted up high by anyone since I got too heavy for my parents."[6] 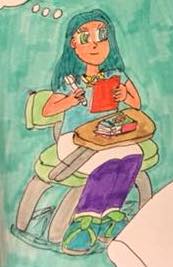 A happy Chris at a schooldesk, drawn 17 years after he had graduated high school.[7]

Of all of the memories Chris holds dear, he seems to be most attached to his years in Manchester High School. It isn't too hard to see why; his years there were among the last where he frequently got out of his house and interacted in a social environment. This is best shown with the Greene County Conspiracy video, the Lego replica, and him wearing the jacket (as shown with the 26 December 2014 incident). He also purchased a schooldesk, which he uses as a workstation, allowing him to further transition back to his happiest years. For many years, he fixated on the idea of a high school reunion, but his numerous attempts at trying to hold one failed. Likely for the best, as the MHS of real life can't possibly compare with the one in his mind.

Like many people who overindulge in nostalgia, Chris has a rather warped view of his time at Manchester High in retrospect. He often looks back on it as a time when he was surrounded by friends and could have easily obtained the true love he seeks to this day, if only he had known how good he had it. In reality, his more down-to-earth recollections of high school paint a picture of Chris being bullied, fairly isolated and disengaged, with even his friends only really sticking around because the educational setting required them to.