Chris and his personality

One's personality is a set of mental, emotional, and behavioral qualities that make up an individual's character. Studying personality is a key aspect of psychology, allowing experts to know what makes people the way they are. There are many methods for testing one's personality, with some backed by decades of scientific research, and others created by random people on Facebook to show ads.

Chris's personality is quite eclectic. It is what draws countless people around the globe to study and follow his antics. He has spoken quite a bit on his own idea of his personality, but his own insight doesn't always jibe with reality.

His personality has undergone quite the change since Bob's death, with some traits undergoing a full 180. 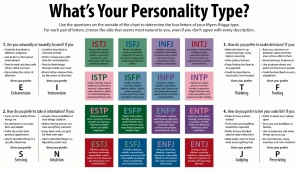 The Myers-Briggs type indicator is a popular personality test system.

Personality testing is a controversial field, with few tests used universally within the scientific community. Even the famous Myers-Briggs test, while useful for rough workplace assessments, is somewhat vague. It misses key areas like creativity and openness, and people who take the test often get different results over time. The closest thing to a gold standard is the Big Five, or OCEAN test.

This article discusses various aspects of Chris's personality, but is not to be taken as a substitute for an actual psych-eval.

Chris has described himself as both introverted[1] and extraverted[2] He has shown traits of both introversion and extraversion over the years. (It should be be noted that few people are 100% introverted or extraverted; it is more akin to a spectrum which people fall on. People can also react differently to different contexts, such as a casual one-on-one hangout versus a large crowd.)

At high school, Chris appears to have been fairly introverted, though he had a strong drive to be extroverted and outgoing. A leaked icebreaker worksheet shows that Chris only talked to 7 of his class-mates. They were all female. Despite trying to later hold a high school reunion, in the Song of Christian, a 16-year old Chris describes having few friends and how his "loneliness is off the scale”. Even with the social prestige of being a water-boy to the school basketball team and his Gal-pals, Chris took his mom to the school prom. Nearly 10 years after the prom, Chris talked about feeling like an outcast at the prom, however his highlight of the evening was when one of his gal-pals felt sorry for him and "pulled [him] onto the dance floor". This dance "felt like hours" to Chris.[3]

Around the time of discovery by Encyclopedia Dramatica, Chris was mainly an introvert. He kept to himself and barely spoke to anyone but his sweetheart. He joined most public chats in both text and voice forms only after being goaded by his current sweetheart[4] or a troll. And even in these chats, he didn't converse a lot, and only answered questions directed towards him. Even while playing video games, he mostly stuck to playing single player games such as God of War, Pokemon, Sonic and Animal Crossing. Any multiplayer game he did play was mostly with his sweetheart like LittleBigPlanet and Burnout Paradise. Before his discovery, when he frequented the THe GAMe PLAce, he mostly kept to himself (and Megan), and rarely interacted with other people except during card games.[5]

Classic Chris would clearly fall on the introvert side of the spectrum but he isn't a full on introvert. He did visit an anime expo in 2004 and 2005. New Chris, however, would easily fall on the extrovert side since 2017, as he started publicly responding to people, started playing multiplayer and co-op games such as Tetris 99 and PayDay 2, visited multiple conventions like Bronycon, Omegacon, BABScon and the TooManyGames expo. He has also started streaming videos, and answering questions his fans have. He has also joined public and private discord groups, though his interaction with other humans in them is limited. On Twitter, he has started interacting (although poorly) to a ton of people ranging from artists to enablers.

While Chris may strive to be kind, his efforts often fall flat and instead come across as annoying, overwhelming or creepy. Chris at least shows he makes an effort to look like a kind person, and he has referred to himself as the "kind and compassionate Christine Chandler".[6] But saying you're kind and actually being kind are two different things.

Many of Chris's attempts at being kind, from calling complete strangers "darling" to kissing guys he just met, are a clear violation of other's boundaries and easily make people feel uncomfortable. Ironically, his attempts can be quite unkind.

Anger, or tard rage as trolls call it, is a defining feature of Chris's personality. Also notable is his lack of empathy, beyond the point where it can be autism-related. While autistic people often struggle with cognitive empathy (the ability to know what someone is feeling), they generally have lots of emotional empathy (the ability to feel what someone is feeling after finding out). Chris seems to lack both, ignoring others' feelings even after they directly state them.

Chris uses apologies as a performative tool for making amends and not as a genuine expression of guilt.

In psychology, openness is a person's receptivity to new or unfamiliar experiences and ideas, including changes.

Chris is not very open to thoughts that differ from his, he rejects opinions and actual scientific facts if they do not match his beliefs. When he used to hate the LGBT community, he would reject anyone trying to convince him otherwise how much ever sense they made. He had also gone to the point where he rejected the fact that Asperger's syndrome is a form of autism just because he didn't like it.

His hatred for the xbox too was due to him being closed on the subject, how many ever great games and features people showed him on the xbox, he would reject it and fixate on minor flaws the system had.

However, after he came out as a transgender, he became much more open to the LGBT and accepted people as equals, but his obstinacy has merely shifted topics, for example he completely believes in the Dimensional merge and anyone telling him otherwise is rejected as a troll. He openly rejects proof that the merge isn't happening and cherry picks minor incidents that seem to support his agenda.

A lot of his close mindedness can be blamed on his autism, as autistics are generally scared of change. 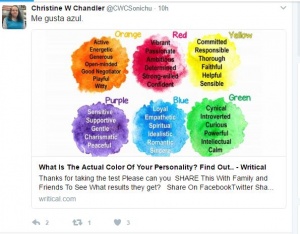 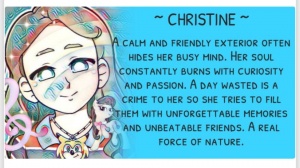 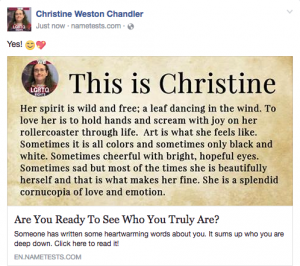 Being a social media addict who also likes magical thinking, it's no surprise that Chris is a fan of personality tests. He has taken many over the years, here are a few of them:

Due to Chris's more recent behaviours, such as a belief in spirit possession and the manifestations of cartoon characters, Chris may indeed now have a mild trauma-induced strain of Dissociative identity disorder, a mental disorder characterized by the maintenance of at least two distinct and relatively enduring personality states.[9] This is most likely connected to manipulation from the Idea Guys and other traumas in his youth due to the mistreatment of those with ASD in a clinical and social environment. It is unknown how real the characters are to Chris, but he seems very adamant that they are real and manifest physically.

The main indicators of DID that Chris displays are:

With this evidence, particularly noting the trauma that Chris must have received from the Idea Guy's manipulations, and Chris's current beliefs about the existence of imaginary places and people, and their ability to possess him, one may conclude that Chris having a mild form of DID is likely.

For two days in August 2009 Chris tried to convince Kacey and the rest of his fans that he had Dissociative identity disorder, a mental disorder characterized by the maintenance of at least two distinct and relatively enduring personality states. One of these "personalities" was named "Christopher" and the other named "Christian", as demonstrated in a video from the time.

The video's original subject was quickly derailed by "Christopher", Chris's more "repressed" personality, by interrupting "Christian" mid-sentence, and having a free-flowing sentence with "Christian", something which is almost impossible for somebody with DID to do, due to usually not sharing memories, or surfacing at the same time. Chris did not end up managing to fool anyone into believing he had the disorder, and Kacey reprimanded him for pretending to have DID and lying to her. Chris apologised and said he made it up to "fuel" the trolls, which still leaves one to wonder why he tried to convince Kacey it was true.