Rob Bell is a member of the Virginia House of Delegates. He served as Chris' defense attorney being hired after the events of 28 October 2011 to defend them in court. According to a leaked email, the Chandlers were introduced to Bell by Wesley Memorial United Methodist Church.[1]

Barbara's insistence on using the inheritance Bob had left the Chandlers to pay Bell to drag out the case as long as possible, in the hopes he would vindicate them, is a major factor that led up to the events of the Financhu Crisis.

An honors graduate of the University of Virginia and the U.Va. Law School, Rob Bell served as a state prosecutor for five years. He prosecuted over 2,400 cases, working with the police and crime victims to bring criminals to justice.

Since his election as a Republican to the Virginia General Assembly, Rob has written laws that crack down on drunk driving and keep sex offenders off school property. In 2008, he helped overhaul Virginia’s mental health commitment laws after the tragedy at Virginia Tech, and in 2011 he launched the new law to expand Virginia’s protective orders. Certainly an odd choice to defend Chris and Barbara. 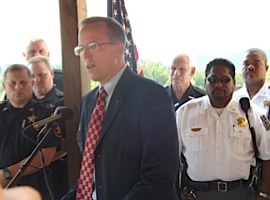 Bell was hired by Chris and Barbara to represent them in the aftermath of the October 28 incident. Chris thought he would emerge triumphant over his arch-nemesis Michael Snyder:

Bell had Chris enter an alford plea[2] - a plea in which the defendant asserts innocence while simultaneously admitting the court has evidence which could convince a judge or jury - and accept a plea bargain and in July 2012 Chris and Barb were each handed a fine and a suspended sentence of thirty days in jail. As part of the deal they agreed both were responsible for Snyder's medical bills he incurred because of the incident. According to eyewitness accounts[3] Bell allegedly referred to Chris as an "adult autistic child" in the course of the proceedings and while Chris took umbrage at this remark, it was probably the sole factor that granted him leniency in sentencing.

Despite getting Chris practically off the hook scot-free in a professional and effective manner, Chris still harbors a grudge against Bell for failing to stand up to Snyder in court. Apparently Chris failed to realize that even the best lawyer in the world can't convince a jury of your innocence if your guilt is plain enough for everyone to see. In a rambling series of Facebook posts posted 2 September 2013, Chris blamed Rob Bell (as well as Michael Snyder, Megan Schroeder, and Mary Lee Walsh) for his latest ban from Wal-Mart, calling him a "major wuss" for failing to work the black magic that would convince a jury that Chris was fully in the clear for nearly running over a manager who rightfully banned an obnoxious manchild from his business. A year later he was still griping about Bell's "chicken advisement."[4]

Years later, Chris mentioned to Catie and Cousin Al[5] that he and Barb had an inheritance from Bob worth "tens of thousands of dollars." However, Barb spent all of it on hiring Rob Bell to defend herself (...and Chris).

When Chris was charged with his assault crime on 26 December 2014, he was forced to go with a public defender, since the Chandlers, without Bob, had managed to make themselves nearly destitute just three years after the Snyder case.