Message for John Kyle is a video, leaked on 24 February 2014, of Chris addressing John Kyle, a California slowcore musician and Cole Smithey's brother-in-law, who sang at his wedding. The video was recorded on 22 June 2013, more than three months after said wedding.

We learn that the rest of the Weston family hate Chris and Barb, that they were not invited to Cole's wedding, and that Chris is in denial about Barb's mistreatment of Cole. Especially telling is his remark about Cole "finally getting married," which is practically dripping with condescension.

Hello, John Kyle. This is Christian Weston Chandler, Joseph Cole Smithey's half-brother. We share the same mother, Barbara Ann Weston Chandler. I understand that, uh, you have performed recently at his wedding a few months ago. I have just learned this.

Yeah, so he finally got married. Whoop-de-doo for him. Oh, and thank him for the invitation that we never recei'ed. We would have RSVP'd sooner and actually come to the wedding had he actually invited me and our mother.

Anyway, I am sending you this video response because I wish to inquire about his, uh, current address so that my mother and I can at least be able to write to him personally, 'cuz she does miss him very much. I tried time and again to get hi- to contact him and get in touch with him, and my mother talked to him. He never responds.

Never responds! He should love his mother! She misses him!

Nearly 72 years old! Sh--she does not need to be treated like a piece of dirt. She is a lot better than that, regardless of what anybody has lied to Cole about. Everything he heard from anybody outside the house. Even Jerry, his father-in-law, or... Jack, I think was the name of his real father? They all lie to him about wha--how, about the kind of person Barbara Anne is, and was.

So at least have the common decency to res- to reply to us, brother! It's been, like, what? Over a decade since the last... the final ever family reunion in Red Oak? Everybody hates us there now since Corrina died!

Anyway, uh, if you know his address, John, please refer to me- relay it to me and you may share this video with Cole as well next time you talk to him. Thank you and have a good day.

On August 28, 2015, John Kyle responded to a comment on YouTube asking if he had ever seen the video. When pressed for details, he responded with a full story of his introduction to the video - and, by proxy, the world of Christian Weston Chandler as a whole - on September 2.[1] His identity can be verified by the account from which he posted the comments, which has been active since 2009 and links to his website and performances. 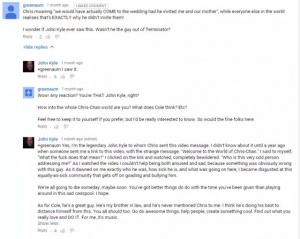 John Kyle's response sheds a few details on the life of Cole Smithey, such as the revelation that he has never mentioned his autistic Internet superstar half-brother - not even to his family-in-law.

Needless to say, John does not seem to have carried Chris's message on to Cole as requested.