On 18 February 2014, Chris solicits medical advice from the Miiverse. 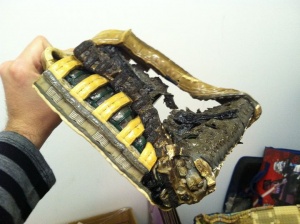 On 27 February 2014, Chris surveys the destruction of his home.

February was the second month of 2014. Not much happened, likely due to the incident which left the Chandlers homeless the previous month. Chris turned 32, and two videos were leaked on his birthday. Both appeared to have been recorded sometime in the summer of 2013. One of these videos sheds a bit more light on Chris and Barb's relationship with the rest of their family, and it is revealed that they were not invited to (or even informed of) Cole's wedding, and that the rest of Barb's family hates her and Chris since the death of Aunt Corrina.