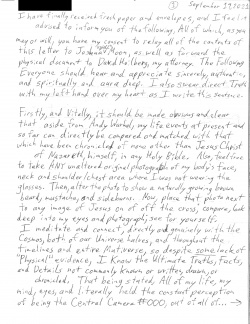 The first page of Chris's letter from jail, September 2021.

September was the ninth month of 2021. As with the previous month, Chris was almost completely silent due to being in jail, with the sole exception of Jail Letter - 19 September 2021.

His second court appearance was initially scheduled to occur on the 16th,[1] but was delayed to mid-November,[2] due to the defense requesting more time to evaluate Chris's mental health.[3]