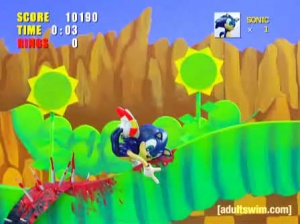 Adult Swim is a late-night programming block on the American television channel Cartoon Network, catering primarily to adults age 18-34. Due to Chris's biological clock, he would stay up late at night and would frequently watch Adult Swim, especially since it catered to two of his chief interests - anime and random-access humor. The name of the block doubles as a CWC-ism, meaning pornographic.

He has also downloaded $120 worth of episodes from various Adult Swim series since fall 2009, through the PlayStation Network.

Owing to his love of Adult Swim, in 2009 Chris was discovered on the Adult Swim message boards. He discussed things ranging from Robot Chicken to his custom ponies, but later on, the account was hacked by the dang, dirty trolls.

Given that Sonic Boom aired on Cartoon Network in the daytime, it is very likely that Chris stopped watching Cartoon Network for Adult Swim and if he had to fulfill his Family Guy obsession, then just used Hulu Plus instead. However, he shared a video of The Amazing World of Gumball--and called out trolls at the same time, natch--on Facebook in January 2015, meaning that he most likely still watched the network despite their airing of the blue-armed bandit.

Chris has always been a fan of Harvey Birdman, Attorney at Law, so in 2005, he entered a contest in which the participant had to to make a commercial for the first DVD release of the show. Of course, he felt the need to shoehorn in off-topic references about his life issues, similar to his his later videos. 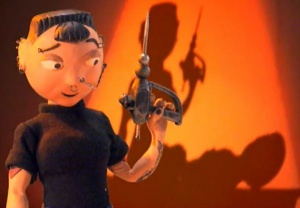 Of interesting note is the show Moral Orel, which is a claymation series mainly focused at deconstructing fundamentalism, and the merging of church and state, which is common in the Midwestern United States and Bible Belt. It openly criticizes the blind faith and intolerance of many American Christians, and people like Chris are exactly who they are making fun of.

Chris has stated in the Mailbag that he has watched the show, and said it was "okay". It is likely that all of the jokes and truths go right over his head, even obvious ones such as when Orel said "I guess lots of things get misinterpreted and lost in translation" while scratching his head with a Bible. The subtlety and sarcasm is lost on the autistic mind. He probably didn't like the pilot episode which hinted at a homosexual relationship between two characters.

King of the Hill

Chris has imitated the protagonist of the show, Hank Hill, on three occasions,[1][2][3] suggesting he has watched the show. Whether Chris actually understands the sarcasm behind the show, much like Moral Orel, has yet to be seen, albeit more likely that he takes it at face value.