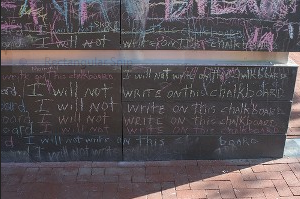 Some of the more ironic notes on the Charlottesville Free Speech Wall.

In Chris's Big Night Out II, Chris hangs out with his gal-pal Kim Wilson again. It is revealed here that she has a boyfriend, but doesn't want Chris to know because he'll throw a huge hissy fit. Ironically, she says that right in front of him, but he's too busy "playing Guitar Hero" to notice.

[Chris is kneeling down in front of the Charlottesville Free Speech Wall, where he draws Sonichu's head in yellow chalk. He draws a © under Sonichu and begins to write his name next to the drawing. At about 0:32 a woman crouches next to him to write something on the wall, and Chris takes a second to register this. He continues writing "Christian W Chandler is a Nice and Good Man". He straightens up and poses next to the drawing, giving the camera a thumbs-up sign.]

Chris: [singing along] ...your best shot!

Guy: So, next time you're going to bring your boyfriend?

Chris: [Whilst air-guitaring in such a way that would cause even the most amateur guitar player scratch his head, mouths "hit me with your best shot" in sync with the song]

Guy: You don't want him to know?

Kim: He wouldn't take it well. Which is understandable, really. [laughs like Elmer Fudd]

Chris: [Hideously "struts" his "stuff" when the song gets to the guitar solo, imagining that he is air guitarring a badass solo... all on open strings!]

[After another full minute of Chris making an ass of himself, the song is coming to a close]

Chris: All female hands on me!

Kim: [laughs] So, how does the drink taste?