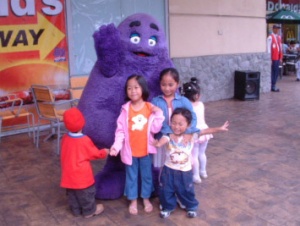 Grimace and some gal-pals

100 2266 is a video Chris uploaded on 4 October 2010. Continuing with the McDonald's character theme, the start of this video sees Chris dress up as the Grimace, who apparently is autistic, a concept lifted from the Family Guy episode "Prick Up Your Ears." He then removes his costume and plays the Gitar of Fail, while singing Mark Wills's "Don't Laugh at Me". Chris finishes up the video by dispelling some rumors, confirming that Jackie is indeed real, that he doesn't hump his PS3, nor any animals.

Interestingly enough, the Grimace was originally a villain that was constantly being trolled by Ronald. Chris's ability to impersonate the fat, amorphous, greedy, amoral, sugar-addicted, obsessive, naïve, self-delusional, egotistical, cave-dwelling, hoarding, anthropomorphic blob of lard's original design is uncanny, even down to his bitch-tits as stand-ins for the Grimace's lower arms. 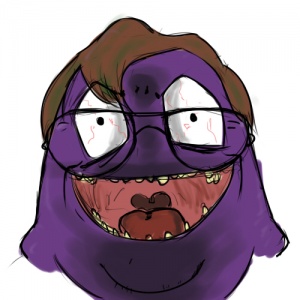 A rather disturbing interpretation

[Chris is dressed in three pieces of purple construction paper on his face, chest, and stomach assembled to vaguely resemble the McDonald's character the Grimace.]

[Singing in a deep retarded voice]

Hello, I'm the Grimace, I'm not dead.
I've been down; I'm feelin' sad.
All this time in my childhood, everybody thought I was different.

["Normal" voice] Don't make the Grimace sad, 'cause you could make me glad. [Chris removes the second two pieces of construction paper taped to him.] By not... being an instigator and gettin' laughs at other peoples expenses.

[Pulls out his Guitar Hero guitar from a pile of shit]

Here, let me sing a little song, it might clear things up a bit.

[Strums "Bingo" on the strum bar for about 10 seconds]

Oh, my little boy with glasses. The one they call the geek.
A little girl who never smiles. 'Cause I've got braces on my teeth.
And I know how it feels to cry myself to sleep.
I'm that kid on every playground who's always chosen last.
A single teenage mother tryin' to overcome my past.
You don't have to be my friend, but is it too much to ask?

I'm the cripple on the corner, you pass me on the street.
I wouldn't be out here begging, if I had enough to eat.
And don't think I don't notice, that our eyes never meet.
I lost my wife and little boy when someone cross the yellow line.
The day we laid them on the ground, is the day I lost my mind.
And right now I'm down to holdin', this little cardboard sign so...

Don't laugh at me, don't call me names, don't get your pleasures from my pain.
In God's eyes, we're all just the same, someday we'll all have perfect wings.
Don't laugh at me.

I'm fat, I'm thin, I'm short, I'm tall, [Chris turns his head and puts on a stupid voice, defeating the purpose of the song.] I'm DEAF, I'm blind. Hey, aren't we all? [Holds out hand towards camera in an attempt to look poignant]

Don't laugh at me, don't call me names, don't get your pleasure from my pain.
In God's eyes we're all the same, some day we'll all have perfect wings.
[Chris does a dramatic glasses removal and says in a much more serious tone] Don't laugh at me.

[Reads off a paper he's been holding] Original song sung by Mark Willis. Look it up on iTunes and wherever. Seriously, don't laugh at me, and I won't laugh at you either. Nobody is perfect. So quit trying to pick on us for our pain. And also for your information, there is a woman named Jackie. It is not some name I've given to my console. And I do not hump my console at all. I only did it that one time cause I was blackmailed. And I would never do that to any animals. Bestiality is WRONG. And don't believe any rumors you hear about me, especially an obvious one like [Retarded voice] detaching a vagina from a sex doll and putting it on a PlayStation 3... or an Xbox! [Regular voice] Too incredible to believe. It is false, no matter how you imagine it. [pause]

So there. Have a good day.