In "CWC Update 10 February 2009" (officially "CWC Update 02102009"), Chris shows off his bedroom floor in a bid to demonstrate to Clyde Cash that he has fulfilled his end of their agreement.

Chris then follows up by reading a letter from Nintendo of America, responding to his private query about his negotiations with Shigeru Miyamoto and "revealing" that he had never been in correspondence with him at all.

[starts tapping and shuffling left foot] The reason why I have my camera aimed down at my feet… is because… in respect to a promise… I am w-- I am wanting to keep… I'm showing off the, uh, cleanliness of my room, which I have just cleaned up. (Chris's definition of "clean" seems to be skewed, as there is noticeably still garbage and clothing strewn about his room)

[films the floor at the foot of his bed] For example, there's, uh… more walking space.

[films the floor on the far side of his bed] Look right here. There's definitely space between that and the bed.

And you look over here… [films the path leading to his door] more walking space… to the door! Plenty of space there.

[films couch] And I got that tub off the, uh, top of my… couch, so it don't fall down and hit anyone. I had to leave the stuff—other stuff up there… but at least I didn't have to compromise much.

[cut to a few bags sitting in Chris’s bathroom closet]

I put the clutter I had and stuff into bags like these… and put 'em in my bathroom closet. I got these bags for, like, a dime each when they were on clearance at my local Wal-Mart.

[cut to a normal shot of Chris, back in his room, sitting on his couch]

But, also, uh, after talking about that and making… [stutters unintelligibly and sighs] Clyde know that I've kept my promise. [inhales deeply]

Anyway, uh… second update: I have received in the mail today a letter from Nintendo of America… [holds up and wags an envelope] in response to the piece I sent in the snail mail. [withdraws letter, tosses envelope, and unfolds letter]

It come from… Mike Chandler, over there. No relation… least as far as I know. [holds letter up for the camera]

Anyway, it has pr—it has… tol—it has proven my th—my family and my congregation's as well as my own theories. I shall read it to you from beginning to end. 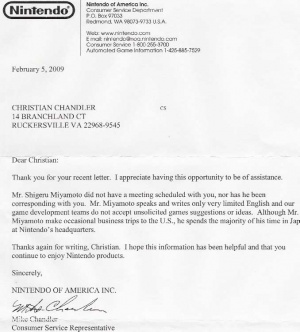 The letter Chris reads from Mike Chandler (no relation).

Thank you for your recent letter. I appreciate having this opportunity to be of assistance.
Mr. Shigeru Miyamoto did not have a meeting scheduled with you, nor ha—hes—has he been corresponding with you. Mr. Mayamoto speaks and writes only very limited English, and our game development teams do not accept unsolicited games, suggestions, or ideas. Although Mr. Miyamoto make… occasional business trips to the US, he spends the majority of his time in Japan at Nintendo's headquarters.
Thanks again for writing, Christian. I hope this information is a helpful, and that you continue to enjoy Nintendo products.

So… I was never in correspondence… with Mr. Mayamoto or Reggie Fil-Aimés at all! They were impostors. I had—I ha—I thought as—I thought as much. So… there it i—there it was. [holds up letter] Black and white... from Nintendo of America. [tosses letter]

And that pre—that pretty—that pretty much, uh, is it for now on the updates. So, uh… for now, I bid you all a very pleasant day. Peace.