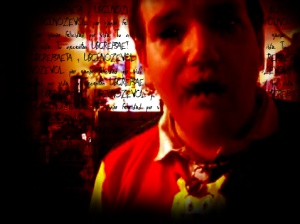 Chris tries to be clever by speaking Spanish backwards, but he just ends up sounding like a raving lunatic. He ends the video by chanting "Uhcinos evol!" (love Sonichu) over and over again, perhaps believing he can brainwash everyone into liking him again, not that anyone ever has. Conversely, he uses the other incantation, "Uhcrepsa etah!" (hate Asperchu), in a failed attempt to draw away the masses from the new rising star in the universe of the Electric Hedgehog Pokémon. Amusingly, this makes his beloved hedgehog Pokemon sound evil (pronouncing the word 'love' backwards).

It's possible that he got this idea from The Simpsons episode "New Kids on the Blecch", where the Navy brainwashes people into signing up by creating a song with the phrase, "Yvan eht nioj" as the chorus. The joke was that it was pronounced as it is written, making the idea of being able to hear it, then subliminally reconstruct the phrase in the listener's head, all the more ridiculous. It goes to show how seriously Chris took the rivalry with Asperchu, to the degree that he attempted to subliminally seduce his audience MK ULTRA-style. Thankfully, it didn't work and Chris is not the geinus he thinks he is.

He has now been wearing the same shirt for about four days. Take from that what you will. He also promised early in the video that two new pages would be uploaded that evening, which turned out to be a lie, as Chris did not update the CWCipedia that evening at all.

Ah, Captain's Log, Stardate... I believe it is the fifteenth of January 2010.

Hm. As usual, I will have two more pages tonight, I hope you all enjoyed the last page where Crystal finally got out of the mirror.

But recently, I am reminded of an old Spanish expression which goes simply as, Tú necesitas uhcrepsa etah y uhcinos evol per ganar felicidad por vida. [Chris mangles the Spanish language, though it can be translated to: "You need to hate Asperchu and love Sonichu in order to be happy for﻿ life."]

Ah, couple of strong verbs in that sent- in that statement. Say it with me.

[Chris gets frighteningly close to the camera, his eyebrows poised to strike.]

Alright, stay safe and have a good day. Bye-