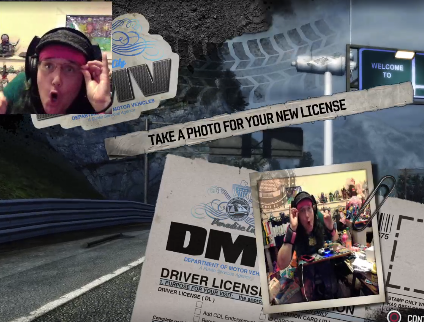 Twitch is a game-centric livestreaming website, which Chris joined in 2018. His first stream was on 16 March, in which he played Burnout Paradise Remastered. Despite it being a relatively easy source of revenue for Chris in theory, given that he could get payments from fans to play video games all day as he already did, he only used it sparingly.

As expected of Chris, he put no effort into setting up his page, as his description is a copy and paste of his Tumblr description:

On 16 March 2018, Chris streamed himself playing the PS4 version of Burnout Paradise Remastered. This stream is notable in that he uses a headset while playing the game; sadly, it has either a really cheap/bad microphone, or Chris is speaking way too close into it (or most likely both), because the stream had continuous moments of ear rape courtesy of him.

A full copy of the stream is currently lost, but several viewers made clips of it that are still available on Twitch, and there is a YouTube compilation of many of the said clips.

Ooh...mash it mash it mash it MASH IT!!!! [drives through a billboard, earning a bonus] HA-HA! [after smashing his car through the billboard, the car lands, and almost immediately afterwards smashes into a pole through the entrance of a road underneath another one] HNNNNG, NRRRRRRRRR. [waggles his tongue]

[regarding a mini-biker riding a bike in the car selection menu] That helmet too big for your head!

[smashing through a fence] Smashy smashy!

[cut to another caption on black background, followed by a plug for the OP's personal channel] IT WAS PRETTY MUCH THAT FOR AN HOUR

On 17 April 2018, Chris streamed for the second time not to stream a video game, but to push the sales of his Transformers toys. It would later be alleged by the Guard Dogs that he did so while under extortion by the Idea Guys. Visibly agitated, Chris vowed to stream until everything he has on stock is sold, refusing to communicate with viewers, making random-access humor (i.e. making random noises at random), and even bringing in Barb to state how dire their situation is (before commenting that she used to be more flirting when talking to him). Despite this, the stream ended early due to the howling of his dogs.

Chris sold the Amnyfest Ring during the stream and thanked its buyer for the purchase. The sale would prove to be key in the ousting of the Idea Guys.

[52 minutes of Chris playing with various toys, demanding the audience buy said toys on eBay ("You're gonna go on eBay!! You're gonna pay me $100!! And NO HATING!!"). Simultaneously, he's telling the audience he's ignoring all their comments. All the while Chris is screeching and babbling in various shrill, cartoon voices. Barb makes a brief (coerced) cameo at 32:00, where Chris interrogates her about fruit]