The Captain is a former advisor and middleman for Chris following from some of the events that followed from Chris's influence from the Idea Guys. For quite some time, he had documented what was happening with Chris behind the scenes to Kiwi Farms.

Being one of three members in a group dubbed by observers as the "Guard Dogs", a group created to protect Chris from potential trolls and enablers, The Captain had also played a significant role in ending influence from the Idea Guys onto Chris.

As a Guard Dog

During spring 2018, The Captain and Marvin stopped the Idea Guys after learning the extent of their malicious activities towards Chris.[1][2]

Use of Amethyst Ring 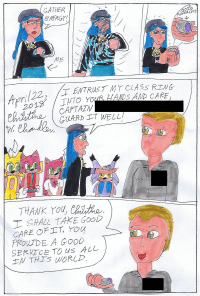 Chris sends the Amnyfest Ring to The Captain.

During April 2018, Chris listed the Amnyfest Ring for sale on Ebay, under pressure from the Idea Guys to sell it and various other items in order to fund their monetary demands.[3] The buyer of the ring turned out to be The Captain, and Chris drew a one-page comic to depict the transfer of his treasured high school ring over to him. Upon viewing the comic, The Captain noticed something odd about it:

The Captain used the ring to turn the tables on the Idea Guys and empower the Guard Dogs to remove them from power. The Captain later sold the ring back to Chris.

Chris depicted this trading of the ring in Sonichu Special 5. The Captain shared a page of the comic on 19 August 2018.

Other Interactions with Chris

On 17 October 2018, Chris's CWCSonichu account tweeted that Chris would be going to Megan's house if he got enough donations.[5] The Captain consulted with Megan.

Shortly after, CWCSonichu tweeted that Chris would not be going to Megan's after all.[7]

In November 2018, The Captain personally intervening after learning of Chris scamming people for money and using three ill stray kittens he had adopted as a vehicle for this. Fortunately, The Captain managed to contact a local Kiwi in Charlottesville,[8] who adopted Liza, one of the three. Another is implying that Chris has IRL friends who offered him marijuana and acting similarly to the Idea Guys.

According to Marvin, through unexplained circumstances, The Captain has ceased involvement with Chris some time between late 2018 and May 2019.[9] 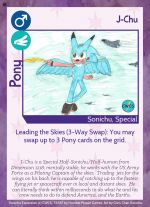 A TSSSF card of The Captain.

Chris created the OC J-chu out of graditude for the Captain's efforts to protect him from trolls, depicting him as a "flying wonder". The Captain expressed disaproval of this, saying he'd "mix up a Moscow mule or two tonight, play some Soul Calibur VI (message me for my PSN if you want it) and pretend this isn't happening."[10]