From CWCki
(Redirected from Cryzel)
Jump to navigation Jump to search 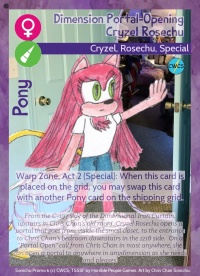 Cryzel Rosechu (born 1 February 2003)[1][2] is an imaginary friend planted into Chris's head by the Idea Guys to portray him as a pedofork and for use as leverage in their manipulation of him.

Cryzel, in drawing and Amiibo forms.

The earliest drawing of Cryzel was dated 19 March 2018,[3] during the height of the Idea Guys' psychological hold over Chris. By the 26th, Chris was led to believe he was married to Cryzel in a polyamorous marriage with Magi-Chan.[4][5]

In the early hours of 21 April 2018, Cryzel Torture took place. It is a nine-hour Discord chat with the Idea Guys, which saw them torture Cryzel in a highly graphic role play session while Chris could only beg them to stop. Chris, clearly intimidated and distraught by these actions, submitted to their demands to furnish them with more money and video games.

Cryzel is an Electric Hedgehog Pokémon with the abilities of portal manipulation and Keen Eye.

Cryzel is featured in Chris with Teen Troon Squad, a video of Chris hanging out at a Teen Troon Squad member's house. In it, Chris fondles and french-kisses Cryzel - or rather, the thin air next to him.

In a June 2022 drawing, Chris retconned Cryzel to be over a hundred years old.[7]

The Idea Guys' hold over Chris was so potent that he retained their changes to his imaginary world long after their removal from power. On October 2018, Chris released Cryzel's backstory, clearly ghostwritten by the Idea Guys as it contains elements not usually seen in Sonichu lore (and confirmed by Guard Dogs member The Captain[8]):

Cryzel's egg, originating from the Chaotic Rainbow in the year 2003, was sent to Earth 1218. She would land in Burns Hill, New Hampshire, taken under the care of a black antiques dealer by the name of Gregora. Learning the trades of her adopted father, she evolved in a week before Magi-Chan discovered her, quickly teaching her to speak and to use her powers. On 2 March 2018, she would leave Gregora, run away with Chris and Magi-Chan and was married three weeks later, at the tender age of 15.[1] 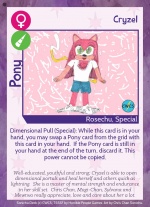 A second TSSSF card: "Well-educated, youthful and strong; Cryzel is able to open dimensional portals and heal herself and others quick as lightning. She is a master of mental strength and endurance in her skill set."

Despite her being a dimension-crossing spouse of Chris, Cryzel has played an insignificant role in the comics so far due to Chris's comic output crashing shortly after her introduction.

In Sonichu #13, Cryzel makes her debut posing with Chris, introducing herself as one of the destined spouses of Chris.

In Sonichu #14, Cryzel accompanies with Chris to his 2019 BronyCon trip.

Cryzel is featured on the cover of Sonichu #17, saying she will do everything in her power to help restore CWCville (as it was in ruins following the events of Sonichu #13).