Chris has been particularly susceptible to cult-style brainwashing from trolls since the Idea Guys saga began in fall 2017. While Chris has always been naive and easily tricked, the Idea Guys took things to the next level by exploiting his weakness at differentiating fantasy from reality and his desire for validation to manipulate Chris's beliefs on both his imaginary world and his real life.

After the Idea Guys were removed from power in spring 2018, Chris failed to reflect and improve on his mental health, in spite of his court-mandated appointments with a Region Ten psychiatrist, and instead left the gates wide open for more bad actors to influence his beliefs in his quest for more validation.

From the Idea Guys

Below are summaries of changes to Chris's fantasy world and sense of reality attributed to the Idea Guys.

Throughout November, Chris made several posts,[1] some accompanied by drawings, on being possessed by Hyperdimension Neptunia goddess Uzume Tennouboshi and an invasion of CWCville by enemy forces from the Neptunia video games.

The Christine Doll, shortly before being executed.

A day after the "Freestyle Dance", Chris described in detail how Silvana had been saved in a military conflict titled Operation BARBarossa, thinking the name was meant to be a clever nod towards his mother. The post was littered with references to World War II, particularly on actions by Nazi Germany, such as "prison camps full of large ovens" built on CWCville soil.

Days later, Chris expanded on the new CWCville lore,[2] giving the names of the prison camps. He also warned that CWCville's supply of U.S. money had been tainted with a virus – a concept borrowed from the video game Tom Clancy's The Division – and encouraged travelers to use "Cwcsmarts" instead – a name slightly reminiscent of Nazi (and Weimar) Germany's "Reichsmark". Later, he mentioned that CWCville's ZIP Code had been changed from its previous Mexican designation to one in Germany, near the picturesque village of Birkenau, not to be confused with the WWII death camp Auschwitz-Birkenau, which operated in German-occupied Poland - As expected, Chris failed to notice this error by Idea Guy, and so the abuse continued.

Two weeks after the BARBarossa post, Chris had noticed speculation that he had fallen in with the Nazi crowd, and took offense to it, insisting that the ideas had come from Count Graduon.

On 26 December, the Idea Guy informed Chris that citizens of CWCville who refused to accept SLGBTQ formed a homophobic klan and attacked the CWCville Mall, and rioted after the trial of Jamsta for molesting Punchy Sonichu. In the same message, he mentioned that the TrollBusters have been reformed into the "CWCstapo", an obvious (though lost on Chris) reference to the Gestapo, the secret police of Nazi Germany, to "be better at stopping criminals".[3] The update contains the line "A police state is a Country run by CRIMINALS", a quote from Fatherland, a novel set in an alternate timeline in which Nazi Germany won World War II.

A few weeks later, on 16 January, Chris was told that the MLP doll he had customized to his image was, in fact, bugged by Nazis. He took vengeance by smashing it to pieces on camera. A few days later, Chris destroyed his Christmas tree and a photo of Hulk Hogan in Get Out, You D*** Nazis!‎ for the same reason.

On 26 November, Chris broke his longstanding policy barring elections in CWCville by announcing that the position of mayor was up for election.[5] The mayoral candidates included several notorious historical figures, Russian president Vladimir Putin, actor Brendan Fraser, Ian Brandon Anderson and Payday 2 character Bob McKendrick. Incumbent Allison Amber did not run for reelection. Chris himself endorsed McKendrick, due to him sharing a name with his father, with a slogan ripped off from Pmurt's "Make America Great Again".

Brendan Fraser won the mayoral election and took office sometime in December;[3] Ian Brandon Anderson won the vote for chief of police but Chris has yet to confirm that he has taken office. 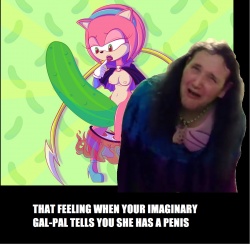 A distraught Chris posted to Facebook and Twitter in early December, saying that Rosechu had informed him that she was actually transgender, and had a penis up until the events of Sonichu #8, at which point she underwent advanced gender-reassignment surgery to become "Fully Woman" and enable her to give birth to her children.[7]

Chris, agitated about the prospect of altering his canon in such a significant way, put up a poll to ask fans whether Rosechu should stay trans or be retconned back to his original concept of her being female from birth, pointing out that Rosechu being trans would hurt him and that the other option would hurt her. This reaction was seen by spectators as trans-shaming towards Rosechu, who he believes to be real in another dimension. In essence, Chris wants to be accepted as trans, added a ten-year-old trans-female to his comic, and forced Rosechu and the gang to fully accept and love Chris for coming out – but refuses to believe Rosechu herself could possibly be trans.

Residents of the CWCville dimension

With the revelation that the Nazis have taken Cwcville, it is also revealed that pre-tomgirl Chris in the comic was an from an alternate timeline, where he was whisked into the past by the Nazis. Every atrocity committed by Chris is also revealed to be the actions of Nazi Chris. He was then killed by tomgirl Chris with a swift kick to the testicles. 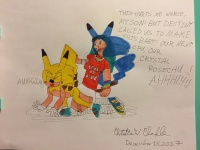 Chris butt-fucking Sonichu in comic form in order to fulfill a prophecy for Crystal's birth.

Magi-Chan foretold of a prophecy in which Crystal would be born by Chris mating with Sonichu. He also informed Chris that if this was drawn, he wouldn't have to do it in real life. Chris complied[4].

Sonichu #15, a book Chris had wanted to use for a modern retelling of Sonichu #0 prior to his known interactions with the Idea Guys, has significant alterations to the canon of the comics. Sonichu's new birthday is given as April 20th, or "4/20" – representing the slang term "420", but also coinciding with Adolf Hitler's birthday and the anniversary of the Columbine massacre.

Another change in birthday is for Magi-chan, which was changed to 14 November, 1948[8] - the joke being that this made him 69 years old - making him the oldest Sonichu in the comic. It is also the same birthdate of Prince Charles, the current heir apparent to the British throne.

Halfway through December, Chris exclaimed that Silvana had been lost in the past, but that there was a way to bring her back if his followers would "BELIEVE In Silvana Rosechu, and her Fullest Existence in Cwcville, Virginia, USA, Of All Timelines, Worlds and Dimensions!". She was revived in a new form, with her old one destroyed.[9]

Sonichu lore was changed from an unknown number of Sonichu species to an exact number - 69[9] - which Chris had to retcon Sonichu 8 to fit in.

After Wise was outed, Chris resumed uploading pages for Sonichu #12-9. In it, jokes and references inserted by the Idea Guys survived: Night Star and Diamond Melody order a hotdog from a Tesco merchant (Tesco, a supermarket chain in the United Kingdom, became embroiled in a scandal during early 2013 in which it was found out that they had been inadvertently selling processed beef adulterated with horse meat to customers). Night Star also rambles about her age, giving references to Gears of War.[10]

Partial pages of Sonichu #13, then titled Sonichu #16, were posted by Kiwi Farms users whom Wise had confided in, the plot of which involves his explanation on how he got access to Chris and the nightmarish state of CWCville he had described to him. Chris retained the story after the Idea Guys were ousted, however, his allies suggested that he avoid publishing the issue.

Chris was told that some people are half-Sonichu, such as Chris, his father Bob and serial killer Ted Bundy. Barb, on the other hand, is full human.

This idea was implanted into Chris prior to Josh Wise being doxed in January 2018; Chris maintained belief in this even after the Idea Guys had been finally removed from power in May 2018, bringing it up in June 2018 during the Count Dankula interview.

In July 2018, Chris, during a long rant on being a chronicler for the Sonichu-verse, mentioned a belief that Megan has the memories of CPU Red Heart, which she had earned while in politics[11].

Chris began a polyamorous relationship with fictional characters Cryzel Rosechu and Magi-Chan on 26 March 2018. Eventually, Chris declared himself to be bisexual after having had Magi-Chan as a boyfriend.

Strangely, Chris continued to hold onto this delusion even after the Idea Guys were removed from power[12]. 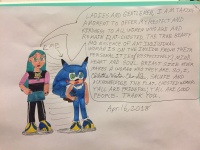 Early in April, Chris posted a drawing commemorating flat-chested women, depicting himself as flat-chested instead of with the usual comically-large breasts.

In March 2018, the Idea Guys led Chris to believe he was in relationships with fictional male characters Kun T’Nyuget and Magi-Chan, and that this meant he was bisexual in real life.

On 7 December, Chris posted a "dark" Pokémon fan theory, lamenting that Pokémon are kept in suspended animation with "NO Simulated Fields made from Virtual Reality! NO Living Room Apartment Setting! NOTHING! Suspended Animation in Dark".[13]

On 21 April 2018, Chris recorded I’m Sorry for Ruining so many Fandoms, in which, having been thoroughly gaslit by the Idea Guys, Chris desperately pleads for his fans to forgive him for central aspects of his internet identity.