Sonichu #15 is the seventeenth issue of Sonichu. It is a mix of material plagiarised from a fan comic titled Rosechu's Story and lore brainwashed into Chris by the Idea Guys. Its cover is an alternate version of the infamous "Zap to the extreme!" cover on Sonichu #0, with a transgender Chris directing Sonichu, who responds, "Yes, I will!! Thank you, mother!!!"; Chris believes that his art has improved in the thirteen years between the two books.[2]

Due to Chris's recent legal troubles, it's pretty clear that this issue will not be completed anytime soon.

Sonichu 15 was announced by Chris on 17 October 2017 directly after he completed Sonichu #12, put on hold during the Idea Guys saga, and resumed in July 2019 until Chris lost interest and abandoned the comic again.

It was intended as a "Retelling of the Classic First Three Episodes, BUT with More Details; More Commentary and Dialogue from Sonichu and Rosechu",[3] Days before thre announcement, Chris learned of the fan comic Rosechu's Story.[4] Reading it on Tumblr, he enjoyed its story so much he decided to copy it for Sonichu 15, acknowledging the source material with a hastily scribbled note on the front cover. 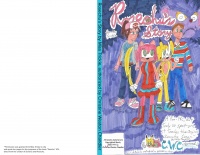 Misleading advertising. A cover Chris drew for Rosechu's Story, with only the spine and fine print on the back cover crediting the actual author and illustrator.

In addition to ripping off Rosechu's Story, Chris also decided to monetize it for himself. In June 2019, Chris downloaded Rosechu's Story, drew a cover for it in his own artstyle, had it printed as a book through Lulu, and placed it into a lot of Sonichu comics for sale on Ebay[6] and also sold copies through Cwcvilleshopping.com. 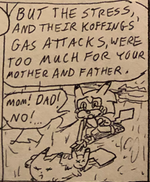 Sonichu mourning his parents' death, an example of the lore introduced by the Idea Guys.

Chris's weaknesses at writing stories stands in contrast to the fan favorite Rosechu's Story. Despite extensively copying its scenes, Chris still managed to water down the comic's storyline and emotional impact by ignoring scenes of character conflict, inserting walls of text, revising dialogue to his taste, and breaking up the story flow by adding pages detailing an irrelevant portion of Sonichu's day.

His most noteworthy change to the plot was in deciding to depict the Raichu with a blunt tail (in the Pokémon games, this marks a Raichu as female), even though Rosechu's Story's plot depended on Rosechu having been born male, in an obvious attempt to put his foot down on the much-debated and -ridiculed topic of Rosechu's birth gender. However, the Idea Guys subsequently brainwashed Chris into believing that he was wrong and that Rosechu was really born male,[7] so Chris reversed his alteration in a 2019 revision.

Partway through Sonichu 15, at page 33, Chris ran out of material to adapt from Rosechu's Story and begins to tell Sonichu's backstory, featuring lore the Idea Guys had brainwashed into him during one of the comic's hiatuses, one example being Sonichu's parents had been gassed to death by Team Rocket's Koffing Pokémon. Art-wise, as soon as he shifted from copying Trickie's scenes, the composition instantly reverted back to Chris's typical style of characters with minimal backgrounds surrounded by text.