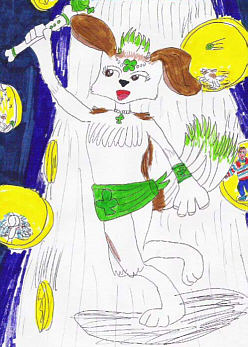 Look at those legs god damn!

Patti-Chan is a fictional character based on Chris's beloved dog Patti, who died in 2006. The lead story of Sonichu 6 was a tribute to Patti. Allowed no rest even in death, the poor creature has been reborn as an anthropomorphic dog-woman, and now wanders the city of CWCville.

The development of the character is indicative of Chris's immature reaction to death.

A beagle/spitz mix, Patti was born on St. Patrick's Day in 1988 and was Chris's faithful dog for the next eighteen years. By June 2006, Patti was not as energetic as she had once been, and her ass itched. One night while howling at the fucking moon, Patti was distracted by a bright star, and considered her desire to walk upright and express to Chris in human language her appreciation for his companionship. Following this, Patti ate grass in the yard, unwittingly catching a four-leaf clover in her mouth, and went to sleep.

The following day, when Christian awoke Patti, she discovered that her wish had been granted, and she had been transformed into a rejuvenated, vital, humanoid creature. Later in the day, Patti expressed a desire to leave her home to roam freely. Taking into account Patti's somewhat alien nature, Chris decided to take her to CWCville via the magic portal in his bedroom, where she would be accepted as an ordinary citizen. After giving Patti a tour of his mayoral office and introducing her to Allison Amber, Chris gave her a cell phone and credit card to provide for her needs.

Sometime later, Patti would meet the people of CWCville, most notably Rosechu. She then joined the ranks of CWCville's heroic defenders, joining Darkbind Sonichu, Megagi, and Sailor Megtune in reinforcing Christian and the Chaotic Combo against Mary Lee Walsh. Following this battle, the assembled heroes convened at Chris's office, where Patti argued that Chris is sweet at heart and isn't jealous of anything. Punchy challenged the objectivity of Patti's opinion, on the grounds that Chris's dog is predisposed to see the best in him.

During the quest to rescue Crystal by obtaining the seven Sonichu Balls, Patti observed that they had obtained four of the balls while two others were trapped with Chris in the Time Void, and wished for his safe return.

Later she also participated in the Sonichu 10 executions, being one of those who killed Alec.

Patti would appear in Sonichu 12 attending the SLGBTQ festival, greeting Chris, who is now a Tomgirl. Later on, she assist the Sonichus in battling the jerkops invading CWCville.

As seen in the Scrapbook of Fail, near the Megan Shrine, there is a hand-drawn sketch of what appears to be Patti-Chan, labeled the Ace of Clubs. It reads "When Patti comes into contact w/ anything Irish or eats clovers she morphs into the Ace of Clubs." It doesn't take a rocket scientist to figure out that Chris stole Megan's character design, adding to the cast of stolen characters, which includes Megagi and Jiggliami.

In a short story, Chris refers to Patti as the "Ace of Cloves", because he's apparently too stupid to realize that the Clubs in a pack of cards already look like clovers, which this was a play on. Chris has an odd tendency to rename the things he steals from friends, "fans", and loved ones. Whether this is because he wants to maintain some degree of originality or if he just honestly thinks his minor changes actually improve the character isn't certain.