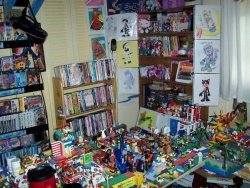 The Megan Shrine is on the right.

The Megan Shrine was a small shrine in Chris's room, containing drawings and gifts from Megan Schroeder, and an excellent example of his nearly religious obsession with her.

Collectively, the contents of the shrine contrasted in a strange way with Chris's otherwise intensive efforts to assert his stereotypical masculinity and heterosexuality. It was full of My Little Pony figurines, stuffed Hello Kitty toys, hyper-feminine shojo manga like Fushigi Yûgi and Tokyo Mew Mew, DVDs of Wedding Peach and other similarly effeminate shojo anime, Sailor Moon merchandise, and at least one American live-action chick flick (The Truth About Cats & Dogs).

The shrine featured different pieces of artwork encased in clear page protectors, organized in two columns, presumably all drawn by Megan. The left column featured Megan's original version of Patti-Chan as well as various Pokémon drawn in a Sonic the Hedgehog art style, while the right one has a drawing of Sailor Moon along with pictures of two of Megan's characters: Spunky Skunk, who would be written into Chris's comics as Megagi La Skunk; and Hound Howl, who would be adapted into the world of Sonichu as Canino Houndhowl. Notably, each picture except for those of Sailor Moon and Patti-Chan appear to have been traced from the same source, an official Sonic the Hedgehog illustration. This indicates that, like Chris, Megan found some merit in recoloring the same character. However, it is not surprising that Megan's traces and redesigns are more complex and of an arguably higher quality than Chris'.

These are the objects which were collected as a result of Megan and her apparent influence over Chris. There may be more objects hidden in the organized chaos of Chris's room.

To the left of the bookshelf the following drawings were hung:

Three drawings were hung to the right of the bookshelf:

On the bottom of the bookshelf three drawings were placed: the covers for CWC's Mix Jams '06: Story of My Quest Part 1 and 2 (apparently some kind of a Megan-themed CD) with a drawing of Mewtwo between them. Photos of the bookshelf after the Megan Shrine was removed reveal that the drawings at the bottom hid a fifth shelf.