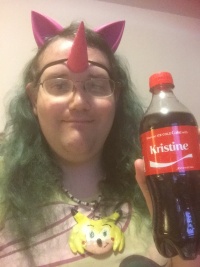 The unicorn cosplay is a set of accessories Chris obtained at the 2017 BronyCon. It consists of a unicorn horn, ears and tail. In many cases, Chris has been seen wearing the horn and ears together with his Sonichu Medallion.

Chris continued wearing it after the event. On 16 August, three days after BronyCon ended, Chris posted a selfie of himself holding a Coke bottle, while wearing the cosplay. His commentary was limited to the Coke, suggesting that he had normalized the cosplay as part of his typical attire. 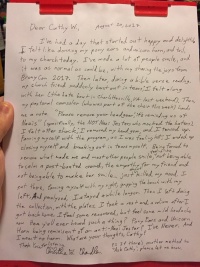 Chris's note on how the unicorn cosplay went over at his church.

On 20 August, Chris went to church wearing the full cosplay. Partway through the service, during a reflection on the previous week's violence between neo-Nazis and protesters in Charlottesville, he was handed a note by his pastoral counselor, requesting that he removed the horn and ears. Chris claimed the note mentioned that his attire reminded the congregation of Nazis, specifically "NOT Nazi jesters".

Speculation is that Chris mangled the meaning of the note in his mind, and that it may simply have requested him to remove his head piece because it made him look like a jester, inappropriate for a church setting. Another theory is that Chris could have meant "Nazi gesture", but spelled it as "Nazi jester". The horn may have reminded attendants of Ku Klux Klan-style pointed robes, which they conflated with Nazis as far-right movements in the United States have used both Nazi and KKK imagery. In light of the recent violence in Charlottesville, the congregation was likely unusually suspicious of any bizarre-looking attire.

Chris, surprised at being called out, obeyed. Later, after leaving the church, he popped a valium and hand-wrote a note on the experience to Cathy Weseluck, a voice actress for My Little Pony, tweeting it to her and asking for her advice. She has yet to reply.

Chris was subsequently seen wearing the cosplay on his videos about the August 2017 solar eclipse, wearing it outdoors.

On 16 September, he attended Cville Pride, a local LGBT event, and wore the cosplay along with the medallion and Z-Ring. He was photographed by local news media.

Chris again wore the cosplay at a screening for My Little Pony: The Movie with his Pokémon club on 6 October. Distraught from his breakup with Jessica Quinn, he took a selfie after incurring brain freeze from eating ice cream.

The Pony wings are an apparel that resembles the wings of pegasi in My Little Pony. They attach on the back under the neck. Chris has started using this since at least BronyCon 2018 and has been pictured wearing them in BronyCon 2019. It is unknown where Chris received them from.