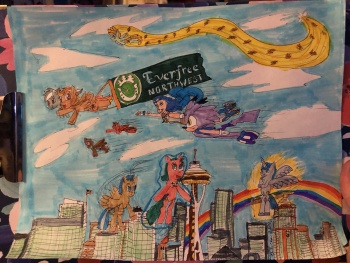 Chris's artwork based on the convention.

Everfree NW (Everfree Northwest) is an annual My Little Pony convention held in Bellevue, Washington. Chris intended to go to the 2021 convention held between 13-15 August, however Everfree Northwest blacklisted him from attending and revoked his ticket during the fallout of the incest call, a leaked conversation in which Chris admitted to having incestuous relations with his mother, and, in any case, he was in jail while the con took place.

Part of Chris's planned trip was going to be to get Kiwi Farms users to chaperone Chris in order to prevent him from getting into trouble or possibly running into any potentially dangerous A-Logs (I.e., Jacob Sockness).

In June 2021, Null announced on the Kiwi Farms that Chris was planning to take the approximately 41-hour drive to attend the convention in Seattle, WA.[2] Null, however, had arranged for Chris to take a plane flight instead, with funding for the trip and additional expenses being provided to GoFundMe in exchange for Chris having to complete commissioned artwork and video requests for the contributors. Chris was to drive to Washington, D.C. and then fly to Seattle. In July, Chris made arrangements with Bella to carpool to D.C. together.[3]

On 9 July 2021 Null started the GoFundMe fundraiser with a goal of $1,000 with the plan that any extra funds would go towards any emergency expenses. The page featured a video Chris uploaded to promote the campaign as well as a couple of paragraphs outlining how the money would be spent and details about the reward commissions. [4]

The fundraiser surpassed its initial goal of $1,000 within 6 hours of the campaign starting and managed to reach a total of $5,085 on 13 July 2021 before it was closed for further donations.[5]

Chris released the first public shout-out video, Paid Shout Out to Lifeguard Hermit, on 9 July 2021, followed by Chris Chan's shoutout to JoSona6 on 14 July, which was released for public viewing by its requester.

Following the Incest call being leaked and Chris stealing $750 from Barbara's bank account, on 31 July, Null posted an update to the GoFundMe page stating he would be returning all of the donations and that the GoFundMe page was in-part a test to see if Chris could handle completing commissions, with the hope that it be a way for Chris to reach financial stability in the future. Null has since then cut all direct contact he had with Chris. 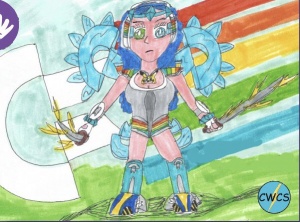 On 11 July 2021, Chris posted to Twitter stating that he would be hoping to cosplay as CPU Blue Heart during the convention. He also stated that he would be willing to pay a costume designer for the cosplay to be assembled, implying that money from the initial $1,000 fundraiser would've been used to pay for it. The cosplay apparently would have included a one-piece torso outfit, shin guards, and the Commodore Wings.[6]

Chris stated a day later on Twitter that he had supposedly found a person willing to design some parts of the cosplay, however, that he was still in need of someone to design the one-piece torso part of the cosplay.[7]

The problem, of course, is the fact that high quality cosplay outfits usually take a while to make, and that they are even more difficult to create when they are made remotely, away from the person who would need to be fitted into the uniform. Given that Chris had regularly stretched the truth about his obesity problem in the past, and the short notice that the outfit would have been made on, the results would have likely been far from ideal.

Since the Incest call was leaked and Chris was arrested on charges of incest, whether the unnamed designer Chris had found actually produced any pieces of the cosplay is unknown, although if pieces of the cosplay did exist at one point, it can be assumed that it has since been scrapped or repurposed into another outfit.

Bella and the Suitress had planned to attend the convention with Chris. "The Suitress", a young autistic woman who had a genuine crush on him, was originally set to meet him there. Chris had also recorded an audio file for the Suitress promising her he would not get angry upon seeing the rebooted My Little Pony cartoon at the convention.[8]

In July 2021, while making plans to attend the convention, Chris sought to put together a "posse" for "sharing and protection" during the convention, seemingly in response to being informed by Watchman The WCT that Jacob Sockness planned to attend in disguise[9] to meet with him.[10] On 12 July, Chris asked The WCT if he knew of anyone who could help, and WCT indicated that he did not. Chris also mentioned having asked Null and Praetor's Caden if they could help with the posse arrangements.[10] The following day, Chris texted Bella and assigned her to act as a bodyguard,[11] which she agreed to do.[12][13] According to Bella, Chris also wanted her to act as photographer, paying her $500 to purchase a camera and follow him around the convention to take photos.[14]

According to Bella, there was a "love triangle" between the trio - that Bella liked the Suitress, the Suitress liked Chris, and Chris liked Bella - and that this made hotel arrangements complicated as Chris wanted to room with Bella but not Suitress.[15] Bella claimed during the incest call that, in her role as photographer, she would create a slideshow of "romantic stuff" between Chris and the Suitress. Bella, herself sexually attracted to the Suitress,[16] had expressed desires to date the Suitress during the event. She claimed in Discord leaks that she planned to "steal" her from Chris to "protect" her.[17] Chris also invited Bella to be his dance partner. He then invited the Suitress at Bella's suggestion, though Bella claimed that she intended to just dance with the Suitress as Bella thought her to be cute.[18][19]

In addition to her support for Chris's incestuous relationship with Barb, Bella also showed support for the planned sexual intercourse between him and the Suitress in the hotel they would stay at during the event. This is most notably demonstrated in the longest leak of the incest call, where Bella talks about the Suitress being "newer in the bedroom" and encouraging Chris to "have a lot of fun with her" when they do so.[20] Whoever's initial idea this was can only be guessed at, but the Suitress showed a willingness or agreement to engage in this activity, even after finding out that Chris was having an affair with his mother.[21] Regardless, Bella told Chris that as his "photographer", she'd make a slideshow of the photos and videos she was going to take of them getting "romantic".[20] Bella had also said in a conversation with the Suitress that she was pushing Chris to have sex with her. [21]

An Everfree Northwest organizer when asked about Chris on Discord.

On 30 July, after a disturbing call was leaked in which Chris admitted to having sexual intercourse with his own mother, Everfree Northwest decided to blacklist Chris from attending by revoking his attendance ticket, or in other words, silently banning him from the convention. They would later put out an official statement to Twitter regarding their commitment to safety; it didn't mention Chris by name, but nevertheless was clear they were at least somewhat aware of the situation.

Chris was arrested on 1 August, which meant that even if he weren't blacklisted, he would ultimately not attend. Notably, the con was also streamed online, which means Chris could have at least watched it from home.