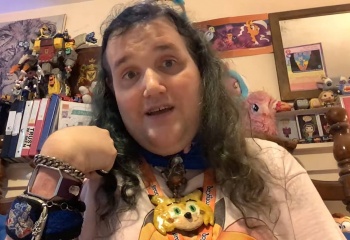 July was the seventh month of 2021. At first, it seemed like a promising month for Chris, apparently having found a new love interest, and being financially aided by a fundraiser in order to attend the Everfree Northwest My Little Pony convention, on the caveat that he does commissions and drawings to the backers, something which manager Null noted he was actually doing well with in terms of productivity.

It was sadly not to last.

Midway through, the month saw a sad turn in Christory, as one of the Chandler's dogs, Snoopy passed away. However, this situation utterly paled in comparison to what happened later in the month.

Late on the 29th of July, audio leaked of Chris confessing to having sexual intercourse with his own mother, Barbara Chandler. Incest in Virginia is a Class 5 Felony as it stands, but questions quickly arose as to Barbara's ability to even consent to the sexual intercourse in the first place. This prompted many horrified onlookers to immediately call local law enforcement, who conducted a welfare check on 14 Branchland Court and took Barbara to a hospital. An emergency protective order would be served against Chris, barring him Chris from entering the premises of the house and contacting his mother until 5 August of the next month. To add salt to the wound, the aforementioned Everfree Northwest convention promptly banned Chris from attendance due to the heavy media attention that the situation garnered.

Things only got far worse on the 31st of July, when Null, after looking at Chris's email, had discovered that Chris had stolen $750 from Barbara's bank account, prompting him to immediately cut contact with Chris, cancel the GoFundMe campaign, and to refund all of the backers of the fundraiser.

The full consequences of this infamous weekend would spill over into August 2021, where Chris would find himself tracked down by weens and being arrested in a motel parking lot while Ethan Ralph, a podcaster based in Virginia, live-streamed the entire arrest to thousands of people on Youtube.