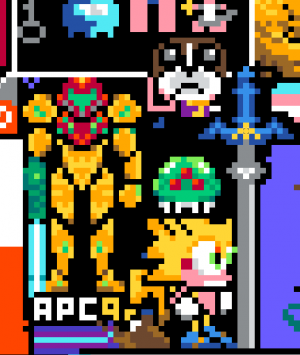 Sonichu appeared on r/Place in 2022

Reddit is a social news aggregation, content rating, and discussion website. Registered users can post, rate, and comment on contents in boards called "subreddits". Chris created an account in 30 May 2016 and mostly hung out at r/PlanetDolan, the subreddit of YouTube channel Planet Dolan, presumably as an effort to get closer to his then prospective heartsweet DoopieDoOver. He also paid for Reddit Premium, a monthly subscription which would remove all ads and give him additional privileges in the site. Currently, Chris is the moderator of r/CultOfCWC, a subreddit populated by enablers and white knights who worship him.

Chris has made only a handful of posts in the years since his account's creation, and ceased using- or at least stopped posting to- the site in 2019.

Chris submitted three questions in r/PlanetDolan, none of them are on topic regarding the subreddit's subject.

This post was made two weeks before he would make the self-inflicted taint wound. He also left a link to two Subliminal Frequency Hypnosis videos. Notably, Chris mistakes the pelvic ischium (the pieces of the pelvis that form part of the hip bones), the pubic bone and associated muscles in and around the perineum as an 'unbirthable Vagina', providing only further insight into the horrifying trains of thought Chris would have been undergoing when readying the knife he used on himself down the line.

Things you do while waiting to fall asleep (13 September 2016)

Unlike the previous two, this saw a single response from a user.

On 27 August 2019, role-playing as Magi-Chan, Chris made an announcement in r/CultofCWC in response to being made a moderator of the subreddit.

When a white knight suggested that that Hurricane Dorian is a sign of the merge, Chris confirms it.

In response to the post in r/PlanetDolan What's the worst things that's happened to you on a school bus?

A user expresses his surprise at his presence.

One day after posting the statue, the same user would express his interest in sending it to Chris. Two weeks later, Chris would reply:

During his phase of role-playing as Magi-Chan, Chris commented on Jacob Sockness's post on him offering a blood sacrifice in r/CultofCWC six days earlier:

A day later in the same thread, Chris would explain the reasoning behind the merge.

A fan asked if Chris could turn water into wine. "Magi-Chan" answered:

Another fan asked a question which was later deleted. "Magi-Chan" replied: