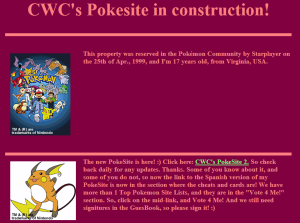 The site in question.

CWC's Pokésite 1, originally referred to simply as CWC's Pokésite, was a website with news and links on Pokémon created by Christian Weston Chandler. It was Chris's first babystep towards his long career of website-making. The page was launched somewhere between 25 April 1999 (when the domain was reserved) and 3 July 1999 (when Chris got the first replies in his guestbook, from his parents).

The quality of the site was actually relatively good; judging from the source code, it appears to be based on a pre-built template from AcmeCity's "HomeBuilder", and was possibly made under adult supervision as a high school project, since one guestbook entry was left by what seems to be a teacher. Chris lost interest in the project quite soon, and by the end of July 1999, it had already been replaced by the much more amateurish-looking CWC's Pokésite 2, with its notorious hand-crafted HTML.

The actual content of the page appears to have been lost. The site may also have had a Spanish translation, El PokéSite de RWC, but if so, there are no traces left of this page either. Fortunately for those who are interested in the uselessness of Chris's high school Spanish grammar, his translation of his second Pokémon site has been preserved.