On 19 June 2019, Chris went to court for a debt hearing. Kiwi Farms user SigueSigueSpergnik attended and posted an eyewitness account.[1]

Went to Chris' hearing. It wasn't even remotely close to being the Trial of the Century (and, for reasons we'll come to shortly, not as revealing overall as might've been hoped), but did provide some mild insight into the current states of both Chris and Barb.

One thing I should point out: the acoustics in the courtroom weren't great, and were made worse by the fact that there's almost nowhere to sit that isn't directly under an A/C vent. This made it extremely difficult to pick up the quieter parts of conversations, so chalk any vagueness or inaccuracies up to those.

With that out of the way, here's a chronology of the morning's events:

10.45am: arrive at the Courthouse and make my way to the courtroom. There was no sign of the minivan parked nearby, so this gave me a few minutes to get settled in. One thing to note: the Wednesday court schedule at Greene County is split between criminal cases (9am to 11.30am) and civil cases (11.30am to 2pm). Ostensibly, this left me with up to 45 minutes to kill before Chris and Barb got there, so was hoping that someone would liven things up by getting sent to the chair. That didn't happen. However...

11.03am: Chris and Barb arrive. More accurately, I hear Chris sighing, squealing, and whining as he sets off the metal detector at the main door of the Court. Repeatedly. They come into the courtroom and sit down in relative quiet.

11.05am: the Judge asks if anyone is waiting for a criminal case to be heard. Nobody is, so he adjourns the court for 25 minutes to retrieve the civil dockets. Chris starts playing with a fidget spinner.

11.07am: Chris starts making ridiculous noises (raspberries, light shrieks, grunts, etc.). Barb shushes him; Chris replies to her discipline with, "we're taking a break so I can make a little noise if I want!" This was delivered in the tone of voice of a smug-yet-pouting six-year-old.

11.12am: Chris starts making 'whoop-whoop' noises and singing a childish tune that largely consists of him going 'lalalalala' in yet another six-year-old's tone of voice. Strangely enough, the first time I ever encountered him in public (late last February / early March), he was singing something virtually identical as he was walking down the street. The fidget spinner is still going.

11.22am: ten minutes of relative quiet are broken by another of Chris' noisemaking fits. This time, it's a giant hiccup followed by sighs, squeals, and more fidget spinner as he grunts at no-one in particular.

11.23am: Chris tears himself away from the fidget spinner long enough to make a comment to Barb about something to do with "hairy legs". Couldn't make out the first part of it due to the acoustics, but she shushed him again. The six-year-old voice came out again to say, "but they are hairy legs!" followed by something else unintelligible and more fidget spinner.

11.30am: a few cases are heard for which the defendants are present; all involve creditors or landlords. Every one of them accepts responsibility for their debts.

11.33am: while that's going on, Chris starts babbling very audibly. The Judge glares at Barb; Barb shushes the man-child. Unsettlingly, it was a near-glossolalia level of babble. The fidget spinner has finally been put away, thank God.

11.40am: more loud sighing and fidgeting from Chris, followed by a theatrically loud yawn. Barb, once again, shushes him.

11.50am: Chris and Barb left the court with the Judge's permission to speak with prosecution attorney in private room re: his case; Barb wasn't allowed in and hung around in the foyer waiting for him. Couldn't follow him in for that, so stuck around for about 20 minutes and when they didn't appear went off to get lunch. My guess is that he'll strike a payment deal with the lawyer in lieu of judgement, fail to keep up the payments, and end up back in court.

A few things that should be pointed out:

The prosecuting attorney on Chris' case was representing multiple creditors against multiple defendants. Frankly, this came across as a regular Wednesday for him, and probably makes up a significant amount of his practice. He wasn't there for Chris specifically; he was just hired to get judgements in favor of the creditors against anyone who might owe them money.

Barb's looking worn-out. There's no good way to describe (or emphasize) this adequately, but it's worse than I can ever remember seeing her. Her hair is completely white, the hollow-eyed thousand-yard-stare is now going out even further than that, and her general demeanor is that of someone who has taken all they can and has retreated into a shell that they only emerge from to shout out something vitriolic once in a while. She's getting around OK physically, but functionally reminds me of an edamame pod.

Chris... Honestly, not too much change there, at least physically. Behaviorially, however, he basically seems to be seriously sliding down the slope into trying hard to revert to childhood. At present, this is likely his strongest defense mechanism against Barb's decline, real-world responsibilities (like creditor judgements), and his lack of social skills bearing down on him. Granted, this is an assessment being made from a completely non-professional standpoint and based on 30 minutes or so of observation - but it's also not the first time I've seen something like this, and he's exhibiting the signs.

Anyhow, he did manage to not park in the Judge's space this time, so he's got that going for him. Which is nice. Oh, and there was no sign of either Snoopy or Clover in the minivan, so presumably they were at the house covering things in shit and destroying furniture. 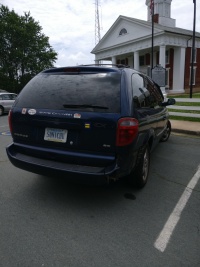 And that "I sleep with dogs" sticker is probably more accurate than anyone likely to read it may suspect.