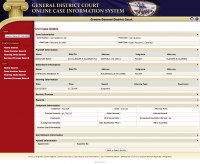 The first of many debt lawsuits against the Chandlers.

Debt is money owed to a creditor. Due to their mutual laziness and propensities towards hoarding, Barbara and Chris are both heavily in debt. Both have been taken to court for their failure to pay debts on multiple occasions: Barb three and Chris nine times, including two garnishment hearings against Chris, as of February 2020. According to court records, Barbara owes at least $20,000, while Chris owes over $10,000, to say nothing of the $115,000 second mortgage on 14 Branchland Court that consumes the lion's share of Chris's monthly tugboat.

This table summarizes various debts between Chris and Barb. Keep in mind that these are only amounts found by Christorians via Chris's online posts and Virginia District Court public records.[2] The actual amount outstanding may be lower, because Chris reported on 2 September 2020 that they were making repayments on some of the debt.

That Chris's parents permitted him to acquire several credit cards is very surprising, but the foolishness with which he uses them wouldn't surprise anybody at all. As of February 2009, Chris had managed to rack up $2,000 worth of debt (at the time of Mumble 4, $1,000 of that sum came from the PSN store, but his bill for PSN downloads increased by the day) and had even stolen his parents' credit cards to use when his own were maxed out.[citation needed] According to an e-mail Chris sent to Vivian Gee, by January 2010 his debt was around $3,500 and had apparently been higher at some point in the intervening time.

By that point, Chris's debt had gotten so out of hand that Bob was forced to step in, making Chris reduce and manage on his spending, and forcing Chris to make regular payments to pay off his outstanding debt. Chris, thoughtless and uninterested in the fact that unpaid credit card debt accrues severe interest, had historically made payments in the smallest installments possible.

At some point, Bob paid off Chris's credit card debt and took payment in installments out of the tugboat in compensation.[5] This foolish act of parental financial enabling allowed Chris to avoid the immediate consequences of his gross financial irresponsibility, and resulted in Chris learning nothing about how to manage his own finances, reinforcing Chris's attitude that he should be able to do anything that he wants and not suffer any negative consequences.

Not surprisingly, it only took Chris a few short months to land himself in more financial trouble. Chris had not only acquired a MasterCard charge account through Best Buy, but as of the second week of August 2010, Chris had predictably used it to land himself in yet more debt and had been laden with fees for bouncing a card payment.[6] Chris acquired the Best Buy charge card without his parents' permission; he only told them about it after receiving 2 bounced check fees that showed up on his bank statement, which his father was actively monitoring.[7] In true Chris fashion, he tried to repay the minimum balance each month. When he was forced to reveal the debt to his parents, Bob was obviously less than thrilled. He promptly took control of Chris's bank account as well as his credit cards. From that point until Bob's death, he received only an allowance in the form of Visa gift cards, leaving him unable to accrue any more debt for a short time.[8] At the time, the prospect of not being able to blow his welfare on frivolities stressed him out.

Curiously, even in his private communications with Jackie, Chris claimed that the overdraft fees that gave away the existence of the card to Bob were the work of trolls. Elsewhere in their conversations, however, he recounts other instances of "getting carried away" and accidentally overdrawing his bank account, suggesting that he was just using the trolls as a handy scapegoat for his own mistakes.

Bob, delusional and in the throes of some sort of conspiracy paranoia involving the staff and patrons of The GAMe PLACe, claimed that it was most likely Michael Snyder who had hacked Chris's credit card and checking accounts.[citation needed]

Bob probably salvaged Chris's credit rating when he paid off all his prior card debt at once, but he angrily claimed Chris ruined it with the Best Buy debt (certainly true), and, in disturbingly Chris-like fashion, seemed to use this damning information to try to make Chris's latest brush with the law seem "petty" in comparison.[citation needed]

After Bob's death, Chris took back control of his credit cards. As he learned nothing due to Bob's enabling, Chris quickly accrued more debt. Unverified information on Chris's credit card debt was leaked on the CWCki Forums on 4 June 2014. It was revealed that Chris had at least five active credit cards, with at least $7,600 in combined credit limit. Of the five known active cards, at least four were revealed to be maxed out, with at least $7400 in unpaid debt between the five cards. It was estimated that the minimum payment on Chris's known debt was at least $220 a month, and it was revealed that the only reason that Chris had been able to obtain the credit that he had was that, historically, he had almost always at least paid the minimum payment each month, although it was implied that he rarely if ever paid more than the minimum.[9]

In June 2016, Chris's got a credit limit raise from one of his credit cards. Chris immediately blew his "bonus" on Transformers only to later beg for money over Facebook while blaming his mother for "impulsively" spending more on their overdue bills than the minimum amount due.

Nearing the end of the 2010s, Chris began to ignore his minimum debt payments, causing multiple collection agencies to file suit against him. Aly Hirschberg, a financial enabler, tried to help by sending Chris free money,[10] but Chris simply spent the money on entertainment such as printing up a line of personal TSSSF cards instead.

A payday loan charges extremely high interest rates (usually at least 400%), which does not bode well for Chris, due to his habit of only paying back minimal amounts at a time.

At present, Chris is basically immune to the consequences of his own debts. The monthly tugboat technically cannot be garnished, money from financial enablers is squirreled away in Paypal or spent too quickly for the court to note, and his debts are unsecured as he does not have collateral in his name (14 Branchland Court is in the name of his parents).

However, the dominoes will begin to fall once Barbara passes away. Without her own tugboat to defray living costs and mortgage payments, it is unlikely Chris will afford the bills to remain at home and must move to an apartment. The damage to Chris's credit rating and background check from so many debt judgements (as well as wannabe weens) make it highly unlikely prospective employers and landlords will take a chance on him.

Concerned followers have urged Chris to sign up for Section 8 housing soon since the waiting list may be long, as debt is irrelevant regarding Section 8 applications, though Chris has not bothered to do so, instead pretending that the Dimensional Merge will bail him out.

In the United States, creditors can force Barb or Chris into bankruptcy by filing an involuntary petition against either or both of them.[12] If the creditors manage to force the Chandlers into bankruptcy, Seterus (the collection agency for the 14 Branchland Court mortgage) may think twice about letting the Chandlers stay (same for any other bankrupt household), increasing the risk of homelessness becoming a reality. The Chandlers would also lose all but the most basic possessions, since the liquidators will try to get as much money as possible, even if it means accepting an offer by a local recycling firm for his hoard of old toys and video games.[13]

However, an involuntary petition is not easy: 11 US Code § 303 requires Midland Funding, Portfolio Recovery Associates and Second Round Sub to show that Chris has at least $10,000 in debt, and also ignore all outstanding debts like a freemen on the land – both of which came into question on 2 September 2020.[14] Furthermore, if the debt collectors proceed with the involuntary petition, and the court rules that petition was in "bad faith", they may end up realising Chris's imaginary wealth in Dimension C-197.[15] For those reasons, the creditors will likely wait for Seterus to foreclose 14 Branchland Court after two missed payments following the death of Barb — a much greater threat to Chris's future than an involuntary bankruptcy.