From CWCki
(Redirected from Tugboat)
Jump to navigation Jump to search 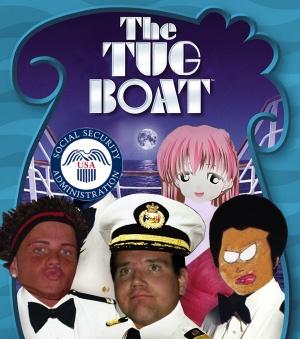 Tugboat, exciting and new
Come aboard. we're expecting you.

The monthly tugboat is Chris's euphemism for his Social Security Disability Insurance (SSDI) payment, which is deposited into his bank account via direct deposit on or about the 3rd of each month.[2] SSDI is part of a U.S. taxpayer-supported program to support financially those whose physical injures or mental ailments prevent them from performing even minimum-wage work. Chris is known to have belonged to this system since at least 2007, before he was discovered by the Internet. In the Father Call, Chris claims that his disability check is "a stepping-stone in the right direction of [him] moving out." Given Chris's tendency to waste his free money on frivolous junk rather than put it towards anything that might improve his life, he was probably just telling Matt what he thought he wanted to hear.

Contrary to popular belief, Chris's check is not need-based, but is awarded on eligibility alone. Most US Americans have to work a decade to qualify.[3] Chris, on the other hand, has only been employed for six months (three at Wendy's, three in a pyramid scheme). However, Bob earned retirement insurance in his years at General Electric, and Social Security also lets retirees' dependent disabled children get payments, even if they have never worked themselves, so long as they were disabled before turning 22.[4] As long as Chris earns less than $1220 a month,[5] and stays unmarried (to someone real, at least) and out of prison, he will continue to receive his monthly tugboat unimpeded.

Despite run-ins with the law, particularly the GameStop macing incident, Chris has continued receiving his benefits over the years. However, 2021 may finally change this: due to his arrest for incest, the SSA is likely to terminate Chris's Social Security benefits since according to their rules, benefits are stopped if a recipient is institutionalized for more than 30 continuous days after being convicted of a crime.[9] And while the SSA does allow ex-prisoners to reapply for their benefits after release, it is unknown how successful Chris will be in recovering his tugboat due to his inherent laziness and general ineptitude when dealing with important matters. 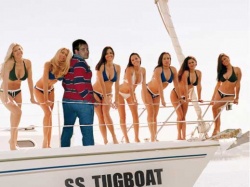 What Chris believes a monthly tugboat is. Your tax dollars at work, gentlemen.

Challenged by a correspondent in the Mailbag, Chris claimed that he is not wasting his taxpayer-funded "tugboat", because he is putting that money back into the economy and indirectly paying the tugboats of others. According to Chris's logic, by purchasing useless commercial goods, he is paying sales tax which the government puts directly back into the hands of the needy.[10] This is irrefutably false; sales taxes go towards state and local governments, but SSDI is funded by federal payroll tax (FICA), which Chris has never contributed to for all but a few months of his life.

Another thing to take into consideration is that not all of the money even stays in the U.S. economy. Chris spends quite a bit of his tugboat on imported products. For example, Nintendo and Sony are Japanese corporations, and Chris's beloved Lego is a product of Denmark. These companies do have U.S. bases, and a small amount of R&D occurs stateside. But at the end of the day, most of it occurs overseas, and let's not forget that the majority of Chris's toys, electronics, and other products were most likely made in some factory in China. In short, a good chunk of the tugboat ends up overseas, so if anything, he's supporting the world economy.

Ironically, if Chris bought a HEXBox earlier (instead of boycotting it until 2017), the majority of money spent on it and on many of its games would be put back into the U.S. economy, as Microsoft is headquartered in Redmond, Washington.

On the advice of his dead father, Chris has never looked for a job since leaving Wendy's, supposedly because the tugboat gives him more money overall. However, Bob was totally wrong. Since 2008, the hourly minimum wage in the Commonwealth of Virginia has been $7.25, pursuant to federal minimum wage. If Chris were somehow to do a complete 180° on his life, get off disability, and begin working a full 40-hour week, his monthly income before taxes and rent payment would be approximately $1,260 USD. This would put Chris's annual income range, before tax, at roughly $15,100. Subtracting what he pays his parents to live in filth, as well as the 5% tax his income range mandates in the state of Virginia, Chris could very likely be left with a ridiculous $9,000 in spending money, enough for many more sex toys and video games, in contrast with the $2,748 Chris pulls in annually from the government after paying off his parents. As SSDI payments have been adjusted for inflation over the years, while Virginia's legislation has not, this earning gap has since closed. Despite this, Chris still could have earned $48,600 (or even more, if he were to be promoted or find better work with his new skills) or more over the last decade by working instead of remaining on disability.

Even if this weren't enough, the most cursory research reveals that a SSDI beneficiary could have earned from $700 a month in the year 2000, when Chris was 18, to $1,000 a month in 2010 without losing a cent of SSDI payments. As of 2019, this limit is about as much as Chris would earn working minimum wage part time.[11] Social Security also has voluntary programs that would let Chris try working a real job for up to nine months without upsetting his tugboat in the slightest.[12] At best, Bob's decision to encourage Chris's unemployment came from the reasonable assumption that Chris could never survive in a real-world workplace environment. At worst, it was negligence or blind delusion that let Chris to miss out on over $100,000 in potential bras, faux-china, children's toys, and PS3 accessories covered in Lego through to the end of 2010 and beyond.

Rough calculations and estimations say that if Chris lives into his 80s, given reasonable "cost of living" increases to his tugboat annually, he will receive roughly $1,000,000 over his lifetime from his countrymen. In this day and age, that's chump change and he'd amass a larger fortune if he simply got off his ass and got a career; of course, it's extremely unlikely that he will live anywhere near that long.

Chris does not even understand which program he is on. In many emails[13][14][15][16] and posts[17][18] he mistakenly says that he receives SSI, which is a different welfare program for the poor that has far tighter restrictions and a typically lower payout.

In March 2022, Chris's tugboat was probably suspended after being sent to Western State Hospital during his jail stay awaiting trial for incest. While the SSDI program allows jail inmates to receive benefits as long as they have either not yet been convicted or are sentenced to less than 30 days,[19] if the inmate is sent to a mental health institution for more than 30 days because of being deemed Incompetent to Stand Trial, the benefits are suspended (although if an inmate is sent for any other reason, a suspension is not applied).[20]