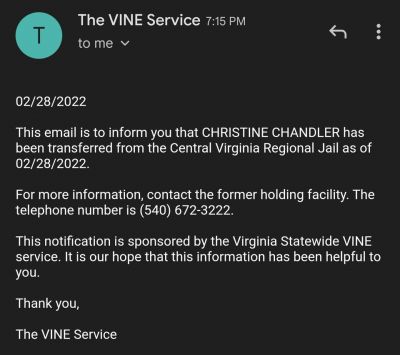 February was the second month of 2022. Little happened this month beyond another continuance at his hearing on 3 February and the publishing of some letters from prior months. On 28 February, Chris was officially transferred from Central Virginia Regional Jail to an unknown location (later revealed to be the Western State Hospital mental institution[1]). Some suspect that Chris was transferred much earlier in the month, as no letters sent or calls made after his hearing have surfaced on the internet. For unknown reasons, some letters sent by Chris in January have taken an unusually long time to reach their recipients, so it is also possible that the jail's mail system is backlogged.