From CWCki
(Redirected from Birthday)
Jump to navigation Jump to search 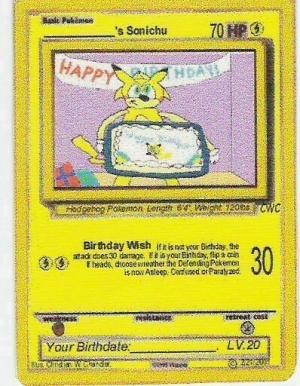 Chris's birthday, 24 February, also known as Christian Love Day, is a significant date in his life, for obvious reasons. However, the bizarre inconsistency of how he celebrates (from some new vidya, to wanting his birthday to be a national holiday) warrants some inspection. Coincidentally, it was also the day the Nazi Party was founded way back in 1920,[2] and when the Russian Government launched their war on Ukraine.

Chris received a Pro 200[3] handheld game console, and was photographed looking visibly disappointed while holding it. Interestingly, it's one of the few times where he would have been pretty justified in being so; given the console in question only had about fifteen simplistic games (in the advertising, they counted each difficulty level as an individual game), most of said games were Tetris rip-offs (and based around the same tall, thin playing field when they weren't), and it had a tiny, crappy monochrome screen and ear-grating sound. It's more than likely that his parents were suckered into buying it based on its TV advertisement making it look a lot better than it was, and infamously promising that they would "never have to buy expensive cartridges again" on top of the cheap price for doing so. We all know how well that worked out.

Years later, when asked by Kacey what did he do with his high school friends, Chris could not recall meeting them outside of school at any instance other than his 18th birthday.[4] Likewise, a former Manchester High alumna who attended this birthday cannot recall any other instance in which she and the rest of Chris's high school friends ever hung out with him outside of school.[5] Chris has stated if he were to give advice to a younger version of himself, he would tell 18 year old Chris that the gal pals he was with were hired by Bob and that he deserves better friends than the gal pals.

Chris's 27th birthday coincided with Fat Tuesday as well as the burial of his late Aunt Corrina in Red Oak. Undoubtedly, this cast a shadow on the festivities. In true Chris fashion, he bitched and complained about not being able to stuff his greedy gullet full of pancakes at his church in Charlottesville instead of mourning the loss of his aunt. He would later go on to complain in Mumble 9 about how Aunt Corrina ruined his special day by selfishly dying. He did receive some birthday money, which he used to fund his Ohio trip two days later. 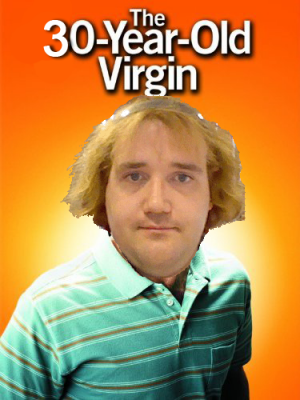 Needless to say, February 24 came and went, with no PS4 forthcoming. The following day, Chris caught some Christorians off-guard by revealing (in the most lulzy fashion) that he had seriously expected strangers on the internet to fork out hundreds of dollars for the birthday boy girl. Not only that, but some had even chosen instead to taunt him by sending him unactivated gift cards and used lottery tickets. And what happened then? Well, in CWCville they say – that the Mayor's massive ego shrank three sizes that day.

Chris eventually purchased his own PS4 when nobody took him up on his "generous offer", but nonetheless pretended that he'd received it as a gift from an employee of the company he bought it from, in an apparent attempt to troll the trolls and/or rewrite history so he can continue believing that he has a massive terrorist organization fanbase who love him and would do anything for him, even if it breaks the law. And sure enough, he's tried to use them for just that, inciting them to commit acts of vandalism and even violence.

Chris tweeted a picture of his cake and Barb sang "Happy Birthday" to him.

Chris requested on Twitter that one of his enablers buy him Pokémon Shield. He later asked for "something well-crafted; magic/healing stones" or just cold, hard cash.[10]

On the day, he Tweeted a Spanish birthday message and an image of him and orbiters forming a heart:

Chris, role-playing as Sonichu, made a simultaneous post on Twitter and Instagram wishing himself a happy birthday. He also shared some gameplay of his Sonichu mod for Sonic World.

Chris spent his first birthday away from home at Central Virginia Regional Jail, continuing to await his trial for incest.

Chris will spend another year in jail. 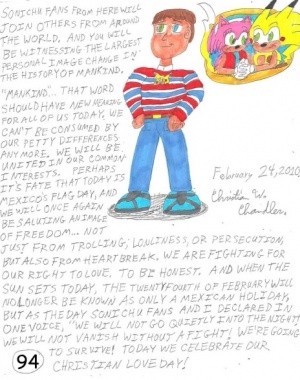