From CWCki
(Redirected from LEGO)
Jump to: navigation, search 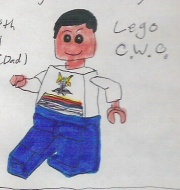 Chris is just as fail in his Lego form as in any other. 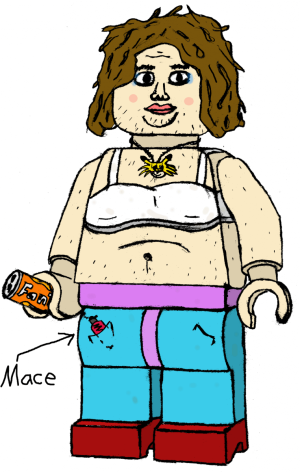 A true and honest minifigure.

Lego (sometimes stylized as LEGO) is a brand of plastic building block toys, first introduced in 1949 by Danish company The Lego Group. They are noted for their durability and ease of use, allowing the creation of almost anything imaginable. Needless to say, Chris has relied heavily on Lego blocks to crowbar his creations into reality. They were a staple gift during his childhood C-Mas, his late teens, and his early twenties. Even today, they remain a centerpiece of his life, with Chris spending literally thousands on Lego sets. He's even requested his own fanbase to get him Lego for Christmas.

It is not unusual for adults to work with Lego, but when they do, there is a good reason other than just playing with them like a little kid. The model villages of Legoland would not be possible without a team of model makers and enthusiasts that make sure that their creations are not disproportionate multi-colored eyesores.[1] CWCki readers from Denmark may also be familiar with a scene in the 1979 comedy film The Olsen Gang Never Surrenders, where one of the gang members created an electronic Lego device to break into a building.

Lego can have a serious purpose too: in 2019, Chinese human rights activist Ai Weiwei recently launched an exhibition that featured the portraits of 43 Mexican students who disappeared in 2014, made entirely of Lego blocks. Ai aimed to convey the “democratic utility” of Lego, specifically to raise awareness of Mexico’s problem with organized crime.[2]

Panoramic vista of CWCville, in all its blocky glory.

Chris has also found other uses for his Lego blocks besides simply building stuff. In his AIM chat with Vivian Gee, he noted that he uses his Lego figurines to "rehearse" imaginary conversations with women.

Beyond any doubt, the most notable creation Chris has ever constructed with Lego bricks is the model city of CWCville that was on display in his room for years, and that was where Chris pieced together many ideas that would later wind up in the Sonichu comics. At one point, CWCville consumed almost a third of his room. Chris himself eventually dismantled much of it. Neophyte Christorians may be surprised to learn that CWCville itself, however, is not the most influential creation in Chris's litany of Lego creations, however.

That award goes to his Lego Manchester High School. 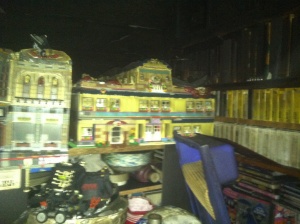 Chris's Model of Manchester High School, after it had been damaged by the fire.

A sizable, sprawling building made from over a dozen Lego sets, this is, without a doubt, one of the largest, most expensive, and most important (to him, at least) creations Chris has ever worked on, a clear attempt to indulge himself in better days by reminding him of when he was still in high school, when he had friends of a sort and was tolerated by society, before his innocence was shattered during his graduation. By all accounts, Chris got it built up literally days before the tragic news that his gal-pals were only hanging around him out of pity, and it was equally-tragically one of many things irrevocably lost during the fire. A general accounting shows that the Lego Manchester High model cost him about $1000.

Chris has since thrown absolutely everything at not only rebuilding his model School, but improving and expanding it. How much of this is a desire to rebuild what was lost, how much of this is an addiction, and how much is an attempt to lose himself in memories of the past is uncertain, but given the increasingly terrifying steps Chris has taken to preserving it, as is evidenced below, it is extremely clear that it's a symptom of a much bigger and more pressing problem.

Influences in the Comics

Inspired by his Mario Kart 64 Lego Raceway, Sonichu and Rosechu have a pair of Lego go-karts in their garage, the only vehicles they are shown to possess.

A panel in Sonichu 6 features a hospital in which Reldnahc Notsew Naitsirhc is being held, which upon closer inspection has its design copied from the set 7892 (owned by Chris in his Lego CWCville), even down to window placement. 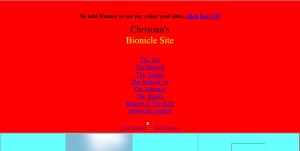 Bionicle was a series of toys created by Lego and developed around a mythological saga. Chris became interested in these sets soon after their release in North America in 2001, so much so that he created his own website dedicated to the line, "Christian's Bionicle Site," in early 2002. The site, which included almost no text, was mainly a catalog of the different characters and their stats. It featured eye-raping blue letters on a firetruck-red background. It linked to CWC's Sonichu Site! and his "About the Author" page, which became one of his first Attraction Signs. Chris tinkered with the site for a few months and then essentially forgot about it, adding no new content other than his expression of rage at Adam Stackhouse for winning an important contest in 2007. The Bionicle site was completely abandoned when he lost control of his Sonichu Site to the trolls in 2009. 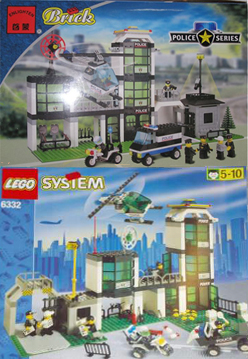 One of these things is not like the other...

In one of Chris's birthday photos he is seen holding what appears to be a new Lego "6332-1 - Command Post Central".[3] Upon further inspection it is apparent that is merely a rebranded Qi Meng (启蒙, "Enlighten") Bricks "POLICE SERIES" set which is almost a direct clone of the original Lego set. Presumably the Qi Meng Bricks logo was altered by a third party and replaced with "LEGO bricks". Chris's parents probably bought it relatively cheap at a discount store that carries knock-off brands, so it's not like they were shopping for a quality present for Chris in the first place. It should be noted that Qi Meng Bricks are much more fragile than Lego and are of generally much poorer quality than Lego sets are, something that probably went unnoticed by Chris.

This one figurine was built out of at least $100 worth of sets.

To no surprise, Chris bought a rival Lego set made by Hasbro (the company behind Transformers and My Little Pony) called Kre-O. Chris specifically bought the $50 Optimus Prime set and used one of the human figurines combined with Lego parts to make a Frankenstein's monster minifig version of himself. A highly amusing note is that Chris's minifig, due to its being from multiple sets, is significantly shorter than other minifigs, which Chris has accounted for by affixing platform shoes (read: small block) to his feet to make him seem taller and more in-line with other minifigs.

This version of Lego Chris was last seen 11 January 2013 on his Facebook depicting his Lego self as a fallen angel of sorts. It also now sports a ponytail. 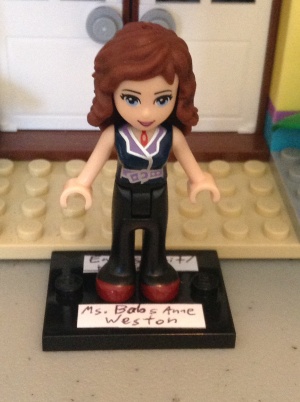 Since the fire, it's become increasingly apparent that Chris has been spending insane amounts of money on Lego sets. Initially, many had written this off as an attempt to rebuild his Manchester High School project following the fire, but by the middle of 2014, it was obvious that he was (and is) simply feeding an addiction, if not trying to escape from reality entirely by trying to return to happier times, and he has spent untold thousands on recently-acquired Lego sets.

This is on top of essentially begging friends and Facebook acquaintances for money, making a Kickstarter project for money to make a Lego CWCville Shopping Center that failed twice (the first time due to it breaking the site rules, the second due to not receiving the correct backing of $5,000 before 23 October) and posting a wishlist of Lego sets he wanted from them. One of the sets on his wishlist was a SpongeBob-themed set retailing for around $300, leading even William Elliott Waterman to call him out on his greed for expecting anyone to spend this much money on him for any reason, let alone to buy him luxuries. In the months following the fire, Chris posted images of his damaged Manchester High Project, and many noticed a huge number of empty Lego boxes near the melted mock-school; sets that are all incredibly recent releases. Thus, the CWCki's team of impartial observers were sent to investigate just how much Chris's addiction to these damned things is costing.

To further breakdown the expense of this project, Chris's new MHS model incorporates about 10 Lego Friends Heartlake High Sets - which retail for about $50 each. There are multiple furnishings in the MHS model that only come in a specific Simpsons box set - one that retails for about $200, confirmed by the fact that this same set is also the only one that provides pieces for a miniature that Chris turned into Sandy Rosechu. For MHS alone, Chris has spent over $700. When one factors in incredibly expensive Lego kits we know he has, like the Optimus Prime set (over $160), a certain Batman set ($50), and the Temple of Light set, that adds up to over $1,000. Other recent identifications that show what Chris has acquired include a $60 Batcave set, a $75 scale model White House, and multiple My Little Pony: Equestria Girls sets.

By the end of 2014, Chris had spent at least $5,000 on Lego since the 14 Branchland Court fire. This is on top of the $800-1200 he spent on creating his MHS project the first time. One might make the argument that this is one of his many steps in repairing CWCville, but judging by the amount of expensive sets he has that he hasn't incorporated into MHS, it's just as likely that Chris has developed an honest-to-god addiction. Either way, his frivolous spending on such luxuries can and will prove financially ruinous to him. 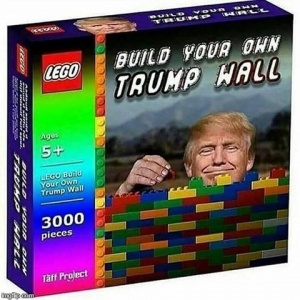 If this is indeed an addiction of sorts, it likely has origins in Barb's hoarding, and her bribing Chris with toys when he was young in order to coax him into speech. While it existed in other forms prior to these events, the stress triggered by the loss of his father, his home, and even the sanctity of his personal retreat have intensified his hoarding of Lego as a way to escape his bleak present situation--which is in-keeping with his family's habit of running away from their problems--and given it an unnerving therapeutic quality that it didn't seem to have before.

The fact that Chris has spent thousands on Lego alone is absolutely horrifying, especially when one takes into account the fact that his financial situation is so dire that he has been reduced to begging for donations on Facebook to get by. Rest assured, good reader: no one on the CWCki takes any joy in this. Whether due to genuine addiction or a misguided attempt to lose himself in fantasy, Chris is at the precipice of a truly dreadful situation, one that is unfortunately only one more thing for which he desperately needs professional help. Not only does he risk further financial difficulty if he continues to spend beyond his means, but his compulsive hoarding may become as physically dangerous as his mother's has. What he faces is a disease, and it deserves to be treated as such.

Sadly, Chris will never admit to there being any problem. 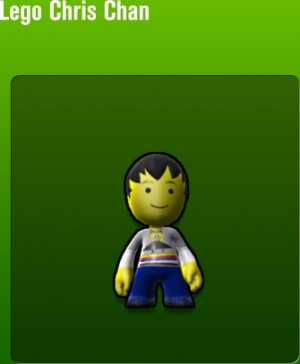