Duck is a CWC-ism for penis, usually in the context of Chris's own penis. (The genitalia of other males, and those of Rosechus, are pickles.) This neologism was originally thought to be a misspelling of "dick", but Chris confirmed in a 17 February 2009 Mumble chat that it is an intentional euphemism.[2]

Chris's duck is known for being bent at an angle and further abused by him with hygiene issues, with Chris's hormone replacement therapy further altering the duck. Coincidentally, real-life ducks are known for their horrifying, twisted penises.

Chris and his duck

Chris's circumcised penis is bent at a horrifying 45° angle, though he has never clearly explained why. Some speculate that Chris has Peyronie's disease, or more likely chordee. Further damage could have resulted from when Chris stuck his duck in the ice for 15 minutes trying to imitate Jackass. 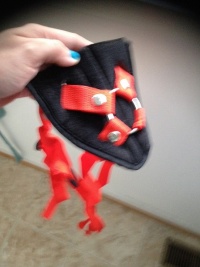 He has a history of urinary tract infections (UTIs), getting at least three over a span of eight years[3][4][5]. UTIs are rarely seen in men, owing to the length of the urethra making it harder for bacteria to reach the bladder. In Chris's case, his DIRTY, CRAPPED BRIEFS, hygiene issues, and the penis-tucking device he used for his transgenderism increases his chances of getting UTIs.

Chris proudly claims his penis is six inches (15 cm) long.[6] He even edited the CWCki at one point to remove a bit of piping that suggested otherwise. In spite of this, visual evidence suggests it is at least an inch shorter (five inches being closer to the average size), and Chris readily lies about the dimensions of his body. In a Let's Read of the 'Giant Penis' comic, one reader speculates that the duck is about 3 inches long (7.5 cm). This is possible, considering Chris did indeed trace his duck onto the paper at the request of Ivy, and more than likely he used standard computer paper - 8.5 inches by 11 inches - and the duck looks to be about 1/3 of the paper width. 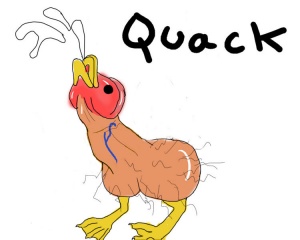 A TRUE and HONEST duck

Chris at least concedes that his penis is of no more than average size, which is a source of some insecurity for him. In an e-mail to Evan during their feud over Simonla Rosechu, he took off on a peculiar tangent about penis length: "There ARE those with dicks longer than 7 inches; yes I am jealous of those individuals, not just you." In Kacey Call 11, Chris asked Kacey for details as to the size of Liquid Chris's penis and expressed regret that his own was not as large. He once attempted to enlarge it with ExtenZe, a supplement advertised to enlarge penises, but he said it didn't work.[7][8]

Toward the very end of his communications with Jackie, Chris claimed that his penis has grown larger and straightened itself out since it was last photographed for public consumption. This claim was disproven in the Tomgirl images, leaked in April 2011, wherein his penis is still visibly bent and the same size it always was.

Many of his nude photos show that Chris shaves most of his pubic hair. While this sometimes has the effect of making the penis seem more prominent, in Chris's case, it just draws attention to the abundant pubic fat surrounding his genitalia. This can not be described as an attractive effect.

When he announced the alleged loss of his virginity on Facebook, Chris claimed his sex partner praised his duck for its size, saying it was the biggest she had ever seen, and put all past partners to shame. This sex partner was later confirmed to be a prostitute,[9] so while it is likely that she said it, its sincerity is dubious.

As of 2014, Chris now actively despises his own duck in the wake of his transgenderism. It is common for transsexuals to detest their own genitalia, which they perceive as incorrect, and in fact, he even uses a homemade device to hold it in. However, the fact that Chris loathed ALL penises is more indicative of issues with his sexuality than with his gender. In 2016, Chris began listening to Subliminal Frequency Hypnosis to try to magically convert his duck into china. In July of that year, he grew tired of waiting and made a self-inflicted taint wound to try freeing the vagina, which naturally failed. Also during that year, Chris began taking MTF hormones, eliminating what was left of his sex drive. 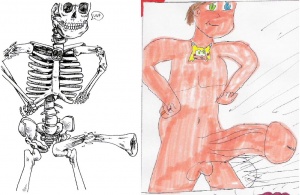 Anatomical analysis of the traced penis.

During the infamous incest call and the Incest fallout chat leaks, Chris revealed, in excruciating detail, that he had been having sex with his own mother through a variety of means, including penile penetration. Chris claimed that his duck still worked just fine, despite using estrogen supplements for years before having sex with Barb, and that he wore condoms during these encounters, despite the fact that she is well past the age of getting pregnant and that neither of them have STIs.

Prior to going to jail, Chris had contemplated gender reassignment surgery, a medical procedure which would part him of his duck for good. However, due to the financial issues facing the Chandler household, it seems unlikely that Chris would be able to afford one, and it's not likely that he'd get support to get the operation while in the slammer, or when or if he ever gets out.