Virginia is for Virgins 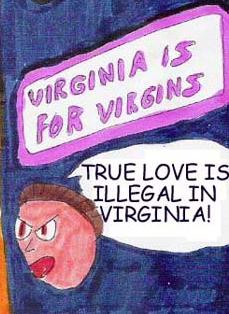 Sign indicating "VIRGINIA IS FOR VIRGINS" with a Jerkop claiming that true love is illegal in Virginia. From Sonichu #4.

In a fashion typical of a paranoid delusional personality, Chris thinks that every man, woman, and child in Ruckersville, Virginia, is taking part in a massive, Manhattan Project-style cover-up devoted solely to keeping him from getting any china. This idea was formulated after his sign was destroyed by Mary Lee Walsh and Chris was told that he couldn't get a girlfriend by using it. 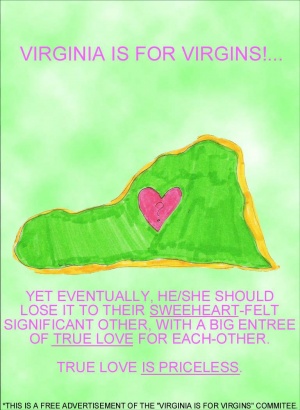 In Chris's Story of My Current Days, Chris explains how he came to believe that "Virginia is for Virgins":

While Chris states that Virginia "is for Virgins" only, people with an actual brain wind up with this question: how is it possible that our autistic hero developed a hatred towards men in a state where true love is virtually forbidden? If lovers cannot stay together, how come Bob and Barbara married? Does he imply that his parents don't actually love each other?

It is possible that all the couples seen in Virginia are nothing more than holograms created by Mary Lee Walsh to taunt Christian, to eternally make him remember that no woman will ever free him from his sexual frustrations. Either that, or it's just Chris who fails to realize that the problem of him not finding a sweetheart does not lie in the fact that the state where he lives is against romance, but because he's completely fucked up in his mind and is not willing to make any changes to improve himself. 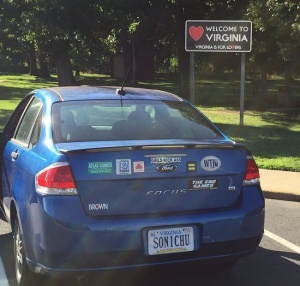 The real slogan, with Son-Chu in the foreground

These links provide irrefutable proof that it is illegal for Chris to ever have sex in Virginia. Read here, and here.

Then again, he doesn't care much for the law, does he?

In a potentially ironic twist, in October/November 2013, Christian/Republican gubernatorial candidate Ken Cuccinelli's platform highlights include making oral sex, of any kind, a Class 6 Felony (defined as "currently unclassified, but can be eventually classified into one of the lowest of classes or up to the fullest extent." Examples including violating court orders, or reckless endangerment; the platform is a blatant smokescreen for Cuccinelli's anti-gay stances), punishable with up to 5 years in prison in Virginia, and a $2,500 fine.[1]

A case for state involvement in Chris's sexuality

Chris goes as far as believing that the government of Virginia should be involved in his quest for China. Just like the speech therapy he received at James Madison University, he believes that he and his fellow social retards should receive special "dating education" before receiving any form of sexual education. In his own words, from his Wikipedia entry: "If I had the Dating Education back then, I wouldn't have to had suffered being a frustrated virgin for soo many years".

As if that weren't enough, Chris also believes that the government should pay for him to get laid. In Mailbag #29, Chris argues that virgins should be referred to state-sponsored sex workers so they can lose their virginity. The fee, he reckons, should be set to $10 for an hour of service, including a thirty-minute crash course in sexual intercourse.