Tings Tingz had created her account on 15 August 2017[1], making up to 507 tweets, drawing fanart for Chris, and giving him money.

Spectators suspected this account of pulling the strings behind the Cryzel and Magi-Chan troll scheme because of how it claimed to be a sweetheart and had knowledge of Magi-Chan's role before Chris mentioned it publicly. On 4 May 2018, following a commentator on Kiwi Farms mentioning that Tings Tingz should be doxed, the account was swiftly deactivated.[2] Two days later, the account resurfaced with an explanation of having shut down over doxing fears, as well as leaking convos explaining that Chris had shared information about Cryzel and Magi-Chan over DM and that was how Tings had known. Tings denied being involved with the scheme. She wrote:[3]

It was later confirmed by The Captain that all Tings did was leak convos, give money to Chris and make fan art.[4]

The convos Tings leaked started the cataclysm and downfall of the CWCProtectSquad.[5] Tings explained to Chris through Twitter DMs why she leaked the Convos and didn't want to be considered a troll masterminding him and people would take his word as genuine truth.[6] 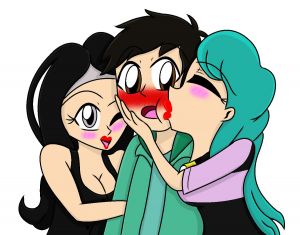 Artist representation of what happened behind the scenes.

Chris ignores that Tings DID ask if it was alright to post. 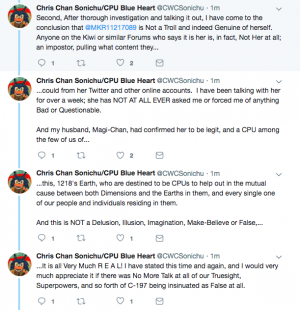 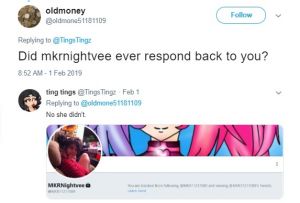 For a good while it seemed like Tings went silent out of fear of harassment. But she continued to talk to Chris through Twitter DMs, drawing him fan art and giving him money when his car broke down. When the the kiwifarms thread on MKRNightVee appeared, Tingz shared the thread and concern about MKRNightVee's actions. At this point, frustrated and finally realizing white knighting for Chris is dumb,[8] Tings drew the line and blocked Chris and MKRNightVee, as it seemed Chris was interested in playing make believe with MKRNightVee, who was someone also claiming to be a CPU Goddess of the Nintendo Switch and feeding into Chris's delusions.