Kun T’Nyuget (pronounced "cunty nugget") later retconned as Kun Hanhphuc, is an original character the Idea Guys inserted into Chris's fantasy world. Kun's primary purposes were in brainwashing Chris into believing he's bisexual,[3] to infiltrate the comics, à la Simonla, and to make a fool out of Chris by tricking him into using the pun/prank name. 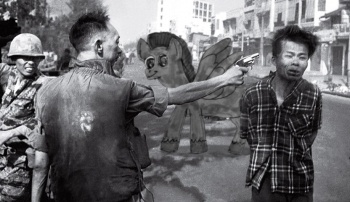 You weren't there, man!

According to Null, who was part of the group responsible for protecting Chris after the reign of the Idea Guys, Kun T’Nyuget was a character conceived by Idea Guy, Joshua Wise, around the time of September 2017.[4] Thanks to Chris's gullibility, Wise was able to convince Chris that the surname "T’Nyuget" translated to "happiness" in Vietnamese, which Chris parroted.[5]

Despite the removal of the Idea Guys from the equation by April 2018, Chris retained many of their ideas – in particular, latching onto Kun, canonizing him into Sonichu, and continuing to feature him in comics and artwork such as TSSSF cards. As of October 2019, Chris still maintains that Kun T. is Night Star's lover.[6] Chris's insistence on keeping the character vexed Null, who eventually persuaded him to change the name to the more accurate translation of "Hanhphuc".[5][7]

Much to the confusion of his followers, Chris first publicly name-dropped Kun T’Nyuget in April 2018, when he posted a delusional confession – citing Kun T. for his new-found bisexuality:

Even though the character was adopted as early as January 2018, Chris did not formally introduce Kun T’Nyuget until May of that year via Patreon. Chris described him as follows:

In the lore itself, though Kun does not explicitly claim a Vietnamese heritage, he does state that his namesake was a Vietnamese individual his father knew, named Cua Trahanhphuc. Regardless of his career in technology, Kun's cutie mark is a bowl of rice, which he received after preparing Asian cuisine.[8] Even when represented as a cartoon horse, Chris's idea of a sweetheart is someone who can do the cooking and maintenance.

Unlike his girlfriend, who is endowed with a plethora of different abilities that would probably make Superman blush—most of all guaranteeing that Chris's ponysona won't be overshadowed—Kun can fly and provide emotional support.

Kun is a major character in the third and fourth storylines of Sonichu #12-9. The Idea Guys primarily wrote the third storyline, and Chris finished the fourth after they had been removed from power:

Weeks after breaking up with Diamond Melody, Night Star meets Kun T’Nyuget in the Ponyville market while lining up for zap apples. Upon making eye contact with the pegasus, she is instantly smitten. The two ponies get to know each other as they approach the market stall, to which Night Star offers to show Kun an "engineering facility" in CWCville, thinly veiled as a date.

A short time later, Star and Kun portal to CWCville, where they are given a tour of the General Electric Plant. The city comes under attack from Rei Ryghts, forcing Night Star to put duty first and abandon Kun to help the other heroes; however, the pegasus-turned-human is in hot pursuit. T’Nyuget reaches the battlefield, only to witness his love interest being drawn through a portal with Ryghts. Alone, Kun is escorted by Magi-Chan to Canterlot High School, so he can return to Equestria via the local portal. 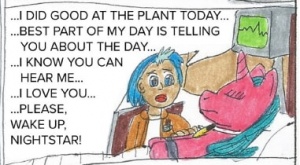 Kun stays with Night Star during her coma.

Upon hearing of Night Star's return to CWCville and her resultant coma, Kun travels to CWCville and regularly stays at Star's bedside in the hospital. In the meantime, Kun uses his talents to assist the General Electric facility in developing new technologies. When Night Star wakes up from her coma three weeks later, the couple return to Equestria, where they decide to move in together.

A few months on, Night Star and Kun T’Nyuget are summoned by the Cutie Map to a wretched hive of scum and villainy, Kludgetown. Entering the local pub, they meet with the pirate Captain Celano, who remarks that two of her crew aren't on speaking terms. The trio board Celano's ship, where Night Star and Kun quiz the two crewmates. They learn that the crewmates are in disagreement over the loyalties of a deceased, former member of the crew, Storm King.

Lacking evidence of Storm King's true allegiance to settle the dispute, the couple are approached by Tempest Shadow, who believes that the evidence can be found in Storm King's former hidden island, which requires Night Star's portal abilities to access. The three travel to the residence and peruse the library, until Kun discovers a logbook from the ship. However, Tempest accidentally activates a cage trap lingering above Kun, who is saved by Night Star at the last moment, but trapping herself instead. While Kun attempts to lift the cage to release his partner, another trap activates, leading to the obliteration of the library. This leaves Night Star with no option but to portal everyone away from the residence.

Returning to Celano's ship, Night Star and Kun examine the ship's log and find proof of Storm King's betrayal. Presenting the evidence to Captain Celano and the two crewmates, the crewmates reconcile – signifying the end of Star and Kun's mission. The comic ends with Kun breaking the fourth wall alongside Night Star and Chris.

Kun is mentioned in Sonichu #13 as one of the reasons Chris believes he is bisexual.