#HarassCWCdirectly is a hashtag campaign Chris made on Twitter as a response to one of DoopieDoOver's posts. Doopie stated the unambiguous fact that Chris' harassment towards her is "beyond scary"; Chris somehow interpreted this as referring to his trolls instead of him. While it is true that weens had been flocking to Doopie's patreon and making unfunny requests and fake pledges, the reality of the situation was far less severe than Chris perceived it to be. As a result, Chris got upset that the trolls were supposedly attacking his sweetheart, and decided to make a speech as a means of attacking them in a video he uploaded on 2 August 2017. However, like every other speech Chris has ever made, it is very poorly made, not only because he decided to ignore the point completely like in many of his other speeches, but because of the fact that he flat out tells all of the trolls to start harassing him, instead of Doopie, the one thing that stresses him out. The speech itself is essentially just Chris saying "If you want to harass Doopie, you're going to have to get past me first". It is an unusual instance of Chris white knighting for someone else, however misguided or unnecessary his efforts may be. 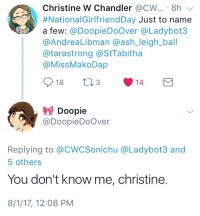 In March 2017, Chris started communicating with Planet Dolan artist DoopieDoOver on Twitter.[1] Over the next five months, his interactions grew increasingly frequent, including personal emails to her business account.[2] Originally one-way, Doopie first responded to Chris in April.[3] Little did she expect, her association with Chris would put her in the crosshairs of weens. Chris began pledging to her two Patreon accounts in the June and August of this year.[4][5] The latter was a NSFW account, in which he requested a very specific piece of art. At this time, Doopie grew frustrated, as weens were pledging then pulling out before payment, in an effort to see Chris' commission.[6]

On 1 August 2017, Chris took advantage of the trending hashtag for National Girlfriend Day by composing a tweet, which tagged his internet gal pal Doopie, and My Little Pony voice actors, among several others.

Later that day, Doopie gave a firm response, establishing that they only had a merchant-customer relationship.[2] Chris sought for a compromise in the form of an "acquaintance" through online communication. The following conversation unveiled Chris' infatuation with the artist, despite his awareness of Doopie's boyfriend. Initially, Doopie tried to let Chris down gently; however, his perseverance led her to admitting that his "extremely creepy" interactions were bothering her.[2]

The conversation between Chris and Doopie brought weens out of the woodwork to advise Doopie and scorn Chris. An agitated Chris proceeded to argue with the trolls. Through this incident, Chris convinced himself that Doopie's rejection was not a consequence of his actions, but was purely those of the trolls. Chris set off to prepare a new series of drawings.

The campaign emerged in a Captain's Log, broadcast on 2 August. In the broadcast, Chris berated the trolls with idle threats for their treatment of his "friends and allies". The astounding twist of this video was that in spite of spending ten years trying to repel them, he requested that the trolls divert their social media "harassment" towards him instead, via the hashtag #HarassCWCdirectly. Note the incorrect dating of the Captain's log video. Given Chris' anger, his attention was elsewhere during production.

Like other online movements, Chris offered an icon for people to use as their profile pictures. He described the icon as a "third eye heart".[8] A small number of followers adopted the icon from Twitter to Kiwi Farms, while others modified it to use against Chris. 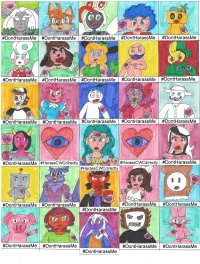 Chris also introduced the secondary hashtag #DontHarassMe, accompanied by a drawing of mugshots featuring himself and Planet Dolan.[9] Though surpassed in popularity by Chris' first hashtag, once again, the intention of this hashtag was to divert the trolls away from his friends. In the drawing, Chris and the Planet Dolan crew are wearing armbands adorned with Chris' symbol, which bears similarity to a historical political party also associated with hate.

In summary, Chris was actively encouraging online hatred to himself on top of his usual serving.

Days later, after Chris had ended the campaign, he explained the meaning of the icon imagery to a fan who was bewildered by it.

Chris's choice to depict "wearing one's heart on their sleeve" is ironic, given that Doopie explicitly advised him that doing that would just be setting himself up for disappointment.[2]

There are uncanny parallels between this video and the first minute of Challenge for Clyde, which Chris had uploaded eight years prior.

Let's... crap for a moment... okay? Because... you're harassing other people, and it's at my expense! I... do not... appreciate that. If you wanna harass somebody, about me, talk bad about me, you have to send that harassment DIRECTLY to ME. NO ONE ELSE. I will not... have my friends... and allies... be disturbed... so abruptly... every time. So don't harass this person, DON'T HARASS THAT PERSON. You wanna arg- you want to TALK SMACK ABOUT ME,

YOU TALK DIRECTLY TO ME! DO YOU UNDERSTAND? And don't ever let me catch you- talking b-about me to anyone else's timelines, comments sections, Twitter, or wherever, that's outside of your own goddamn forum, you trolls!

[punches palm] Don't ever let me catch you badmouthing me to

ANYONE, harassing THEM at MY EXPENSE! DO YOU UNDERSTAND ME?! You better DAMN WELL understand me.

[Chris stops the recording, which lingers on The Playroom for a few moments before cutting away]

Given the heartache caused by his original tweet, Chris deleted it days later. Chris was no longer in contact with Doopie. Furthermore, he was no longer pledging to her Patreon accounts, suggesting that Doopie had refunded the pledges. Amazingly, Chris went on to claim that their relationship was still salvageable,[10] though Doopie soon confirmed that she had blocked Chris on social media.[11] Chris' inability to let go led to the Doopie E-mails, leaked by Doopie herself.

The impact of Chris' tweet also caught the attention of Tabitha St. Germain, a My Little Pony voice actor, prompting Chris to produce a long-winded apology (which also gave insight into his campaign).[12] St. Germain later addressed her fans, advising them not to tag her in any erupting Twitter arguments.[13] St. Germain later disappeared from Chris's follow list, implying that she too had blocked him.

Chris ceased his personal promotion of the campaign on 4 August when he reverted his Twitter and Facebook avatars. In a Patreon post on the same day, he thanked followers for using the hashtag, implying that he still favors the usage by trolls.[14] By the end of 2017, the hashtag had garnered close to one hundred uses from both weens and white knights.[15]

Roughly a year and a half later, Chris would go on to engage in the Soft Exile, again motivated by being blocked by other Twitter users.