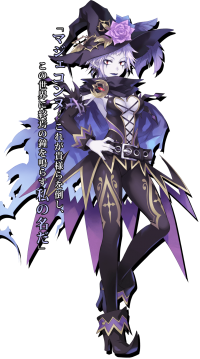 Arfoire, occasionally misspelled by Chris as Arvore, is an antagonist from the Hyperdimension Neptunia video game series. Due to an Idea Guy's influences, Chris believes the character is responsible for possessing various trolls and attempting to prevent the Dimensional Merge.

In December 2017, troll sweetheart Jessica Quinn attempted to lead on Chris for a third time, having "broken up" with him twice before. Chris, wary of the situation, turned to Idea Guy Joshua Wise and asked him for his input, sending Wise several photos of Quinn, including lewds, to analyze, believing Wise had access to Sailor Mercury's computer and could inform him as to whether Quinn was a troll or not. Wise shut down Quinn's attempted return by telling Chris she was really Neptunia villain Arfoire[1].

Chris believed the face-turn from the Squad, especially its leader, Lukas, was largely due to them being possessed by Arfoire.[2]

Nearly a year later, Chris's anger at the Squad dissipated, and during his phase of role-playing as Magi-Chan, expressed that he missed the Squad and hoped they were free of Arfoire's influence so that they and Chris could hang out again[3]. The Squad declined the open invitation to troll Chris again.

Chris also believed that Arfoire represented an obstacle to the Dimensional Merge. On 1 January 2019, upon the Merge's failure to occur, Chris believed it was due to red tape and other complications, stating that Arfoire had been locked away in a magic-proof cell to prevent interference with the Merge[4].