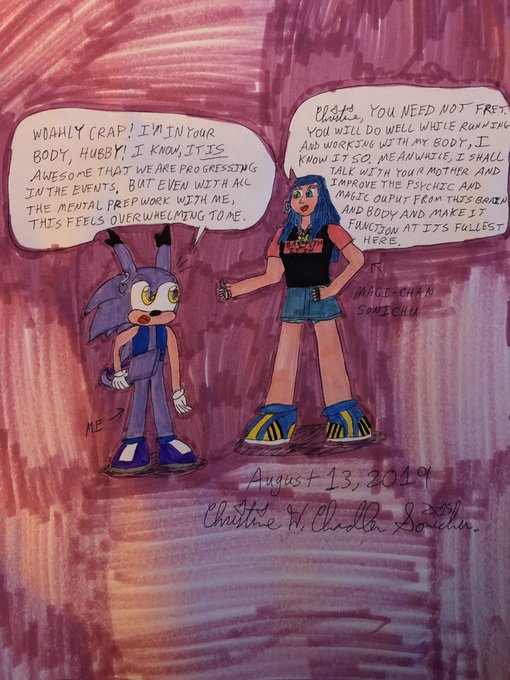 Chris's depiction of the body-switching 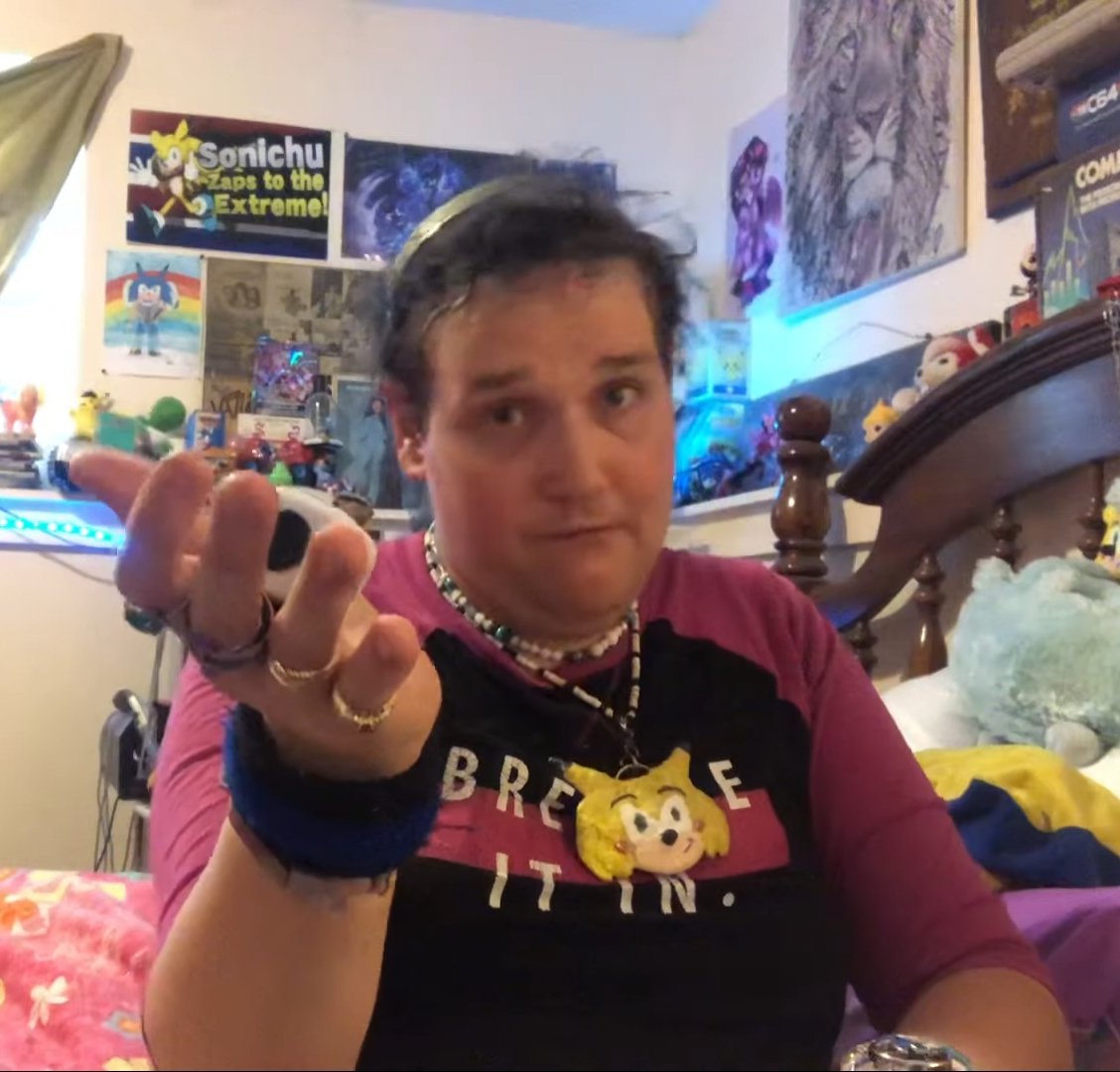 "It is I, Christine Weston Chandler, losing perception on how reality works as usual, now showin' y'all 'dat I have psychic powers even though I don't!"

First recorded statement of Magi-Chan Sonichu - August 15, 2019 is Chris's first YouTube video of August 2019. Though it was indeed filmed and announced on Twitter on the day in the title, for no apparent reason it would not be uploaded for another three days after that. The video showcases Chris's mental health at its absolute all-time lowest: the frazzled, bedhead-y hairstyle he chose to don in the video doesn't help matters, either. Chris, for once, is not speaking in his tomgirl falsetto; Magi-Chan is instead supposedly controlling Chris's body, while Chris's soul was peeled off and stuck onto Magi-Chan's invisible, incorporeal body beside him. 'Magi-Chan' re-iterates that the Dimensional Merge is in its final stages, rambling in classic Chris fashion without much coherence. In a rare moment of self-insight, he states that Chris's brain is well inferior to his own character's. Chris tries to demonstrate his PsychicPowers on a fidget cube, yet fails.

You will note, that since the recording and upload date of this video, I have been posting at my leisure on my personal Twitter account moreso than Christine has been able to, personally. Should you feel need for further validation, seek the wisdoms in my Tweets and compare them to my dialogue in this video, but I feel confident, even in the most hating of trolls, to see the differences between mine and Christine’s mannerisms and personality types, as well as the differences from our auras that have been recorded between this video and her past videos. Christine has, indeed, been practicing psychic powers and magic through my abilities, as I have been working on hers and developing it further. That is all; have a good and safe day. 💜⚡️

[Chris sits down on his bed, looking particularly saggy even by his standards. He looks into camera and addresses us.]

Good day, everyone. - It is I, Magi-Chan Sss...Sonichu. I have taken possession of Christine's body, as we have swapped bodies: her soul is in my body, as you can see, right behind me [he turns to look at what appears to be a huge pair of DIRTY, CRAPPED BRIEFS tacked to his bedroom wall in a 'significant' manner before returning his gaze to us] - on the opposite side of the Dimensional Curtain. [produces his iPhone] I am recording this today, as definitely backed up by Christine's second phone. [pushes the phone into the lens, causing an awkward flare which eventually resolves to let us know the vital knowledge that yes, indeed, this is Chris's second phone on 15 August 2019] It's August the fifteenth. [withdraws phone, looking unsure as to how to proceed after dropping this bombshell. Looks awkwardly to one side, then raises right hand in 'significant' manner.]

Which...on that note, should be the day that I have uploaded this video, originally, long before I made it public. You can definitely tell that it is I versus - as opposed to Christine [gestures vaguely towards himself], not only in the vocal tones [NB he sounds and acts entirely like his usual nasal and autistic self throughout], but also my behavioral patterns.

He sighs, in the manner of one preparing for a heroic effort. Points 'significantly' up again.

The Dimensional Merge...continues to progress - an event will happen, very soon, where my body fully comes into this 1218 Dimension (points briefly at all that is down is only the floor). And I will be swapped back with Christine, and it will definitely further progress from there. (Smiles awkwardly, smacks lips, eyes shift awkwardly aside.) It is - quite different being in a human body, as opposed to my Sonichu body. (Taps forehead 'significantly'.) 'Speshully in da brain! Mah brain works a lot better. Dis brain - (more taps) it needs work. But I am working on it, and I am improving.

[With a smirk, he picks up a fidget cube and places it ostentatiously on his palm. He assumes an expression of solemn meditation. Nothing happens. He looks at us with a 'be impressed, peasants' face as he rather visibly wobbles his hand, causing the cube to roll a little. Thus encouraged, he turns his head to one side and concentrates anew. Nothing continues to happen for ten seconds. Having the good grace to look slightly embarrassed, he curls his fist around the cube and addresses us again.]

...Well, that aside, anyway, still workin' on it. (Yet more taps.) She's got powwwerrr. I'm helping her find it. And she's marrowing [presumably 'borrowing'] my power, too. She'll be makin' a journey very soon to - pro-gress everything there is. You will y'all be able to see and co-exist with each other, very soon. At least at this point [one tap more] mah wisdom, intuition....other thoughts....are able to be shared in this realm. So, take dat as you will, be good...be safe...

[He lifts a portentous finger high, closes his eyes, and engages in heavy breathing for fifteen seconds as though practicing making obscene phone calls. At last, he opens his eyes again.]

...be kind an' take care of each other. [reaches out to switch off camera.]