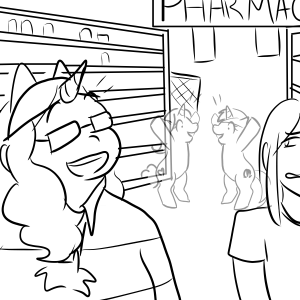 Chris has an enlightened idea of how fantasies and works of fiction relate to the real world. He believes that fictional characters (including his own) exist as sentient beings on some other plane of reality, be it C-197 or somewhere else.

According to Chris, the world in which we live in is essentially a "reality cartoon", and the cartoons people make exist at the same time in the real world and a parallel universe he calls a "Toon World".[1] In this alternate world, his own characters are free to mingle with all other fictional cartoon characters, citing the film Who Framed Roger Rabbit as a model.[2] This strange idea may also have stemmed from the South Park episode "Imaginationland", which involved a realm where fictional characters and imaginary creations could mingle with one another. It may also be noted that Toon World is the name of a Yu-Gi-Oh! card, providing yet further evidence that Chris has no originality whatsoever. 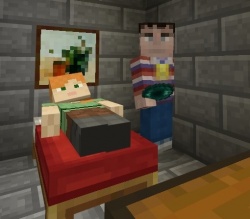 In a universe of multiple realities, anything is possible according to Chris.

Chris's beliefs are such that he even claims to hold the distinction of Mayor of CWCville "IN REAL LIFE".[3] He only admits that CWCville is not real when he intends to pacify others he sees as too slow in the mind to comprehend this idea. He most likely defends this belief because he has accomplished and produced virtually nothing worthwhile in his life, and he likes to pretend that he has made a positive impact on something - if only on a metaphysical level. In his opinion, anyone who does not accept this worldview is "naïve".

The reason Chris rarely allows anything bad to happen to his comic characters is that he believes any damage or tragedy inflicted upon them in the comics will happen to them in, "Toon World". This effect works upon all of Chris's character, meaning that the terrible things he has done to Jerkops, 4-cent_garbage.com, and so on all happened in "Toon World" as well. The Idea Guys were able to exploit this by convincing him they built a giant laser cannon on the moon and threatened they would destroy CWCville with it unless Chris complied with their demands.