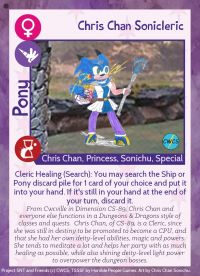 Dungeons and Dragons is a popular fantasy role-playing game, considered the father of modern RPGs. Chris picked up interest in the game during Winter of 2019 after ProjectSNT cited it as inspiration for her redesign of Wild Sonichu.

He tried to convince local card game shop The End Games to unban him in order for him to learn to play (while insisting that their meetup group at a local restaurant was not good enough); however the shop stood their ground.[2]

Chris eventually learned to play from a local group of what he believes to be are friends.[3]

In order to rationalize his triggering over ProjectSNT's redesigns, Chris dreamed up the CS-89 dimension in a meditation session on 11 December 2019. Dimension CS-89 is supposedly the Dungeons & Dragons-esque version of C-197 that is home to Plutia and Peashy from Hyperdimension Neptunia, the redesigns, and Chris's D&D character, Chris Chan Sonicleric.

In his tweets, Chris believed that his triggering was caused by a disturbance in the CS-89 dimension. What kind of "disturbance" hasn't been disclosed by Chris, but he stated migrations of peoples and items from CS-89, alongside entire dungeons via heavy magic, came into C-197. Chris also came into the dimension as a Cleric to prevent "something really bad" from happening. Neither that nor how the migrations to C-197 worked have been disclosed.

Chris also claims that Dungeons and Dragons is one of the events that will lead to the Dimensional Merge.[4]

Chris posted an in-progress character sheet to Twitter on 30 January 2020. As with his art, the sheet is written in pen. A few entries are corrected with Wite-Out tape.

He considers work on the sheet to be meditation.[4]