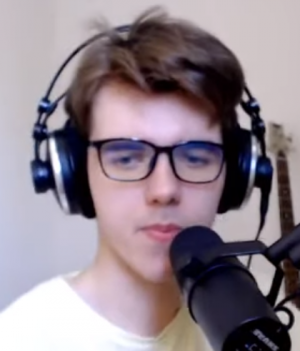 Geno Samuel, our stoic narrator in the flesh.

Chris Chan: A Comprehensive History is a documentary webseries created by Lithuanian-born, Japan-based producer and musician Geno Samuel (also known as Edvinas Grigonis), which began in February 2018. It is, as the name suggests, an extensive, in-depth documentary about Chris's life, similar to Sachumo's. However, while Sachumo's film is an abridged summary of Chris's life for newcomers, Geno's videos go into greater detail, with most videos being between 35 to 45 minutes in length, with a decent portion of this being tied to the playback of Chris's own audio and video. As of Part LXIV, the documentary series is 1 day, 20 hours, 5 minutes, and 17 seconds long.

The series is in chronological order, taking several videos just to cover Chris's life before his internet fame, with a significant portion of the series (28 episodes) dedicated to the troll-influenced events of 2009 and 2010 – trolls had prodded Chris into producing many calls and videos at the time, which the series utilizes for playback. It presents the events of Chris's life in a mostly objective light, allowing watchers to pass their own judgment on Chris and the people around him. Nonetheless, Geno occasionally slips in dry, blunt observations over Chris's shortcomings, along with summaries of how Chris's problems manifest themselves and worsen over time. Furthermore, he also manages to maintain a completely neutral, deadpan tone of voice when discussing the absolute absurdities present in Chris's life, and he reads spelling errors precisely as they are written, which leads to some of the documentary's most humorous moments despite being an overview of Chris's life.

Geno's narration also reflects Chris's changes in identity throughout the series, initially referring to him as "Christopher" before changing it to "Christian" in the first episode and using masculine pronouns for the bulk of the show's run, eventually shifting over to calling Chris "Christine" and using feminine pronouns by the time that the series reaches the events of late 2014, when Chris began to transition. It remains to be seen if he will eventually revert to using masculine pronouns during Chris's extended period of being "possessed" by Sonichu through most of 2020 and part of 2021, although he has used masculine pronouns to describe Chris's past antics after this period in time. Beginning with Episode 61, Geno began altering the theme music to represent the Idea Guys saga. Since the saga in question ended in Episode 62, Geno has said that it would be reverted back in Episode 63.[1]

The series is still ongoing, its latest episode currently in the middle of June 2018, and though Geno initially predicted that it would be around 50 episodes long by the time he reached the present day, Episode 50 ended up covering the events of mid-2016, and it now seems much more likely Geno will have over 70 episodes finished and released by the time he's reached modern Christory. However, this is presuming that he keeps a consistent pace, which may become difficult due to how much occurred during the period when the Idea Guys had influence over Chris, compared to the relative quiet in the first few years after the pepper spray incident. Geno has since predicted that he would reach modern Christory by Episode 89 [2], meaning that he has a laid out plan for the documentary. Once he's "caught up" with Christian Weston Chandler's Adult Chronicles, Geno plans to continue the series incrementally until it ultimately reaches its logical conclusion. It will take a while to get to the present, in any case.

The documentary series has inspired a considerable amount of new discussion related to Chris, which has predictably produced more weens who mistakenly think that "modern" Chris acts like he once did during the so-called "Classic Era" – much of the context behind trolling was never publicly released by Chris's trolls, making it appear as if many of Chris's actions during troll sagas were his own ideas. The documentary itself eventually ended up being a part of Christory in a more direct fashion, as several people who would go on to interact with Chris either found out about him, or were influenced by, the series. Furthermore, Chris is aware of the series, and has commented on it several times over Twitter and YouTube, usually expressing approval of Geno's attention to detail.

In light of the incest reveal, Geno, like everyone else, was utterly flabbergasted by the extremely dark turn that Christory took. Geno then announced, via his Patreon, that the series would be taking an extended hiatus following the release of Episode 59. He explained that he felt that it would be potentially tasteless and exploitative to continue the series immediately after Chris's appalling actions came to light, so he informed his patrons that he would not be completing and releasing new episodes of the series until early 2022. During that time, Geno redirected his attention to work on his other documentaries and music projects. The series officially resumed on 24 February 2022, Chris's 40th birthday.

Geno attempted to monetize his GenoSamuel2 channel. On 13 June of that year, when it was his turn to be reviewed by YouTube staff for the monetization program, they instead issued community guideline strikes due to the clips of bullying featured in the videos, and as a result his channel was terminated.[3] Geno confirmed that he did send an appeal form, but YouTube never gave him his channel back. Fans reuploaded all of the episodes made prior to the strike and Geno created a new backup channel on YouTube where the series would be uploaded from then on.

Geno said that Chris knew of the original run of the series and approved of it.[4]

On 14 September, Geno posted a message explaining why he decided to use feminine pronouns to refer to Chris beginning from Part 43:[5] 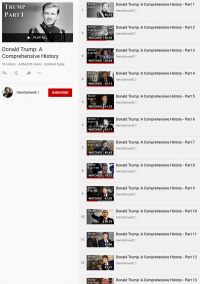 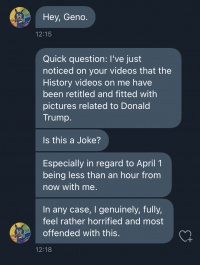 On 1 April 2021, Geno commemorated April Fool's Day by changing the title of the series to Donald Trump: A Comprehensive History, and altered the thumbnails of every video in the series to include images of him.[6] The content of the videos themselves, however, remained unchanged. Chris did not take kindly to this, privately messaging Geno over Twitter to complain about the alteration.

On 1 October 2021, Geno was featured on TrashTaste, a podcast featuring a group of anime YouTubers, thereby exposing Chris to millions of weebs everywhere. In the podcast Geno expressed his desire to also follow his other passions, not wanting to be known as "The Chris Chan guy". When asked how many episodes were possibly left, he replied maybe another 10 episodes. He also said if the opportunity arises… if I can get something done with Netflix, this could be a stepping stone.[7]

In August 2019, Chris, while in his phase of role-playing as Magi-Chan, began "binge-listening" to the series[10] (suggesting that, like with the Sachumo documentary, Chris couldn't bear to actually watch the videos). Chris would make comments on the videos as Magi-Chan via Twitter, and as himself in YouTube's comment section.

In his 100k subscriber Q&A special uploaded in December of 2020, Geno answered a question Chris had posted from the CwcvilleGuardian account. Roleplaying as Sonichu, Chris asked what Geno believed to be the draw of himself and life story.[25]

Geno's documentary is often noted for either introducing many people to Christory or having an influence on it.